December 11, 2014 by ConcertKatie No Comments 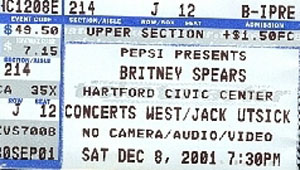 Recap:  O-Town was the opening act for this show and I won a M&G pass with them through their fan club so I got to meet them and get my CD signed before the show.  We were in section 214 because that was the section that I was sitting in when I met Hanson and thought it might be good luck.

I went to this show with my 2 cousins and we were determined to surprise my little cousin so she had NO idea where we were going.  Her mom just told her that they were picking me up and we were going on an “adventure”.  We did great up until it was time to park.  The parking sign said “Event Parking” so her mom pulled up and said “We’re here for the event” and the guy taking money said “Oh, Britney Spears?”  He was kind of hard to understand – but of course Britt understood him and FREAKED OUT.  We were pretty bummed that it wasn’t us that got to give her the surprise!

Britney has a residency out in Las Vegas (that I’m hoping I can get out there to see but time is running out!)

O-Town as I’ve mentioned a few time has reunited as a foursome without Ashley Parker Angel.