December 8, 2014 by ConcertKatie No Comments 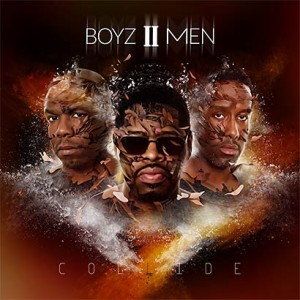 
Collide is the latest release from Boyz II Men, it is their 11th album and was released in October.  I’m not sure I’ve ever listened to a Boyz II Men CD in its entirety before so I am basing this review off of just their singles, which is probably not the best idea, but in the interest of time and me not falling into a Boyz II Men album black hole for the rest of the day…  I don’t feel like this album has any big single like some of their other hits.  The album also kind of bounces around and isn’t cohesive.  The songs on their own are good, though some use some voice warping that I’m not sure is needed because they all have such great voices without using any of that. (And I know this because I’ve seen them live 5 times last year and I’ve heard it for myself!)  I’d give it 3.5/5 stars.