December 23, 2014 by ConcertKatie No Comments 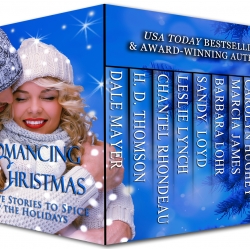 Romancing Christmas contains 10 love stories to spice up the holidays! They include:

Broken Protocols 3.5 by Dale Mayer
Shades Series: Shades of Holly by H.D. Thomson
A Season for Love by Chantel Rhondeau
Christmas Hope by Leslie Lynch
A Christmas Miracle by Sandy Loyd
Salty Carmel Christmas by Barbara Lohr
Heating Up The Holidays by Marcia James
Insanity Claus by Carolyn Hughey
A Family For Christmas by Tallulah Grace
A Father for Christmas by Rachelle Ayala


The books cover a lot of topics – there’s some futuristic stories, murder mysteries, and everything in between included in these stories.  The only thing that they have in common is that they all take place around Christmas time!  Some of the books are novellas while others are a bit longer.  There is 10 in total – read yourself one before bed each night or take a day to sit by the window with hot cocoa or egg nog and watch the snowfall and read them all.  There really wasn’t a book in t his collection that I didn’t enjoy.  All were great and very well written.

Romancing Christmas is available at Amazon for just $0.99! You can’t beat this deal on 10 great stories!

When Charmin Marvin wonders when Christmas Day would be in their new time frame, he sets events into motion no one could have expected.

Dani and Charmin lost a lot when they were brought 200 years into the future. But nostalgia brings the possibility of Christmas back into Dani’s life – if she can make it happen.

Levi hates to deny Dani anything, but all holidays were removed from his society by the government decades ago. He has no idea what she’s talking about – and when he does research and finds out – he wonders if something can be done. And someone outside of their small family wonders, too…

Dani has the best of intentions – but creating Christmas in a world that no longer knows what a holiday is makes her life very complicated very quickly.

Do you like murder and mystery with your mistletoe? Enter Zach Howard, a man who’s finally managed to get his life on track this holiday season, until that is, he comes across a pair of otherworldly sunglasses. Once on, they reveal scenes of a past he would like to forget and a future he finds terrifying. If he can trust what the visions portray, Holly, the one woman he’s never stopped loving, is in danger of a psychopath.

Christmas is a breath away, but will Holly take her last breath? Holly has no idea what fate has placed in front of her. Two years before, she turned her back on Zach because she wasn’t strong enough to deal with his broken soul. This time around, does she have the courage to fight for Zach’s life at the risk of her own? Or can miracles and angels save them both?

The specter of death tempered by beautiful miracles is all in a day’s work for head nurse Tess Riggs and pediatric specialist Dr. Dash Brisson. They both have definite ideas about what they want in life, so throwing caution to the wind and realizing Christmas is the season for love could be their biggest challenge yet.

Sam Bledsoe prefers his reclusive existence. A one-man landscape business keeps his badly scarred face away from curious eyes. But when a woman faints on her way from neighbor Maggie Ross’s house, he doesn’t hesitate. He rushes to help while grappling with memories of the incident that burned him so badly.

Free spirit Becca Sweet is pregnant – and down on her luck. The father of her unborn baby showed his true colors when he showed her the door. The apartment she has lined up isn’t available until the first of the year, and with Christmas and a storm on the way, living in her car is no longer an option. Becca appeals to her no-nonsense sister for help, but Maggie, unaware of Becca’s pregnancy, chooses that moment to dish out some tough love.

When Sam comes to Becca’s rescue, their battered hearts collide. In a moment of holiday magic, they discover that Christmas hope applies to all, even to them. And will hope lead to love, the most previous Christmas gift of all?

Megan Jenkins isn’t looking forward to Christmas, a holiday that reminds her of what she had and lost, a husband who died right after Christmas the year before, leaving her a young widow with a fatherless son to raise. During the course of this Christmas Eve, Megan experiences her own Christmas Miracle as she learns the true meaning of giving with the help of Kevin Murdock, a long-time friend who’s always been there for her.

When Rachel Morgan returns to Paris for Christmas break, she’s not exactly the family success story. That’s Paris, Indiana – just to be clear. Bad breakup. Failing grades. Huge school loan. Things aren’t going her way. Then she runs into Eli Housman at a party. This broadshouldered hottie is the quiet family friend who helped with her computer years ago? A quick kiss under the mistletoe confuses her. No one worth his salt ever stays in Paris, not in her book anyway. The soft-spoken guy with killer blue eyes makes Rachel take a second look. Paris offers her a second chance. Sometimes life can be like a salty Christmas caramel – sweet but with a tang that lingers, leaving you wanting more. Sometimes the boy you leave behind is the man you want forever. “Salty Carmel Christmas” is a novella that includes a great recipe for salty carmels.

Heating up the Holidays

Nicky Paxton is up to her pointed elf ears in work – filling in sick for Santa’s helper, corralling kittens in a mechanical winter wonderland and running her family’s department store chain. With only 14 shopping days until Christmas, the last thing she needs is the return of her high school heart-breaker.

Lawyer and single dad Chris Spencer leaves the Los Angeles rat race to his five-year-old daughter, Holly, in his sleepy Virginia hometown. His first goal is to make sure Holly has a Christmas to remember. His carefully laid plans don’t include a second chance with his first love.

When Holly asks the store Santa for a “fairy pony puppy”, Chris enlists Nicky’s help to track down the elusive item. Despite Nicky’s resolve not to re-gift her heart to Chris, their sexual attraction could power the town’s holiday light display. With the help of mistletoe, a hairless dog and a lonely child, Chris and Nicky just might get their Christmas desires.

A widow of two years, Mallory Gardner is hanging on for dear life, struggling to keep her business afloat while functioning in her dysfunctional family. That’s enough to test anyone’s sanity. But when Arden J. Miller waltzes into town, he has other ideas – like capturing Mallory’s heart even though love is the last thing on her mind.

Can two irresistible forces deal with two immovable objects, or will the effects of the holiday spirit help resolve issues previously thought to be unsolvable?

A Family for Christmas

Erin Matthews returns home to find closure, but she soon discovers truths that changer her life forever. Luke Simmons never expected to meet a woman who sparks fire in his soul, even as his heart is breaking. Together, they find healing, and the true spirit of Christmas, in the love of a patchwork family.

A Father for Christmas

When Bree asks Santa for a father and picks Tyler, both Tyler and Kelly vow to keep Bree from being hurt while fighting their feelings for each other.

Tyler struggles with frightening flashbacks that scare Kelly. Meanwhile, Kelly’s criminal past threatens her chance for happiness. Tyler and Kelly must believe in the power of love to give Bree her best Christmas ever.