December 5, 2014 by ConcertKatie No Comments 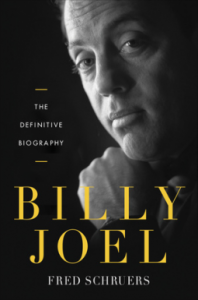 Billy Joel is a biography about none other than Billy Joel. Of course!  The book is cool because instead of being boring and saying “Chapter 1” each chapter is named after one of Billy’s song titles! It also includes photographs throughout the book which you know is my favorite 🙂  The book starts with the history of Billy’s family in Nazi Germany and how they ended up coming to America.  I liked also how it talked a bit about who the girls are that some of his songs are about! Always nice to find out who or what was the inspiration for songs and I love when artists share that type of information, even though a lot of times the songs can be interpreted in many different ways.  There was also talk about how he got into piano lessons and how when he learned he could play things by ear, it got more interesting for him.  Overall a book jam packed with lots of information about Billy Joel and if you are even the most casual of Billy Joel fans – I’d consider this to be a must read!

In Billy Joel, acclaimed music journalist Fred Schruers draws upon more than one hundred hours of exclusive interviews with Joel to present an unprecedented look at the life, career, and legacy of the pint-sized kid from Long Island who became a rock icon.

Exhibiting unparalleled intimate knowledge, Schruers chronicles Joel’s rise to the top of the charts, from his working-class origins in Levittown and early days spent in boxing rings and sweaty clubs to his monumental success in the seventies and eighties. He also explores Joel’s creative transformation in the nineties, his dream performance with Paul McCartney at Shea Stadium in 2008, and beyond.

Along the way, Schruers reveals the stories behind all the key events and relationships—including Joel’s high-profile marriages and legal battles—that defined his path to stardom and inspired his signature songs, such as “Piano Man,” “Scenes from an Italian Restaurant,” “New York State of Mind,” and “She’s Always a Woman.” Throughout, he captures the spirit of a restless artist determined to break through by sharing, in his deeply personal lyrics, the dreams and heartbreaks of suburban American life.

Comprehensive, vibrantly written, and filled with Joel’s memories and reflections—as well as those of the family, friends, and band members who have formed his inner circle, including Christie Brinkley, Alexa Ray Joel, Jon Small, and Steve Cohen—this is the definitive account of a beloved rock star’s epic American journey