November 6, 2014 by ConcertKatie No Comments

It’s been a while since I’ve done concert throwbacks – we were interrupted for some special anniversaries!  Can I just say, I can’t wait until we get to the shows where I have digital photos to share? It’s a few years out still. But maybe I’ll get bored enough to find where my negatives are stashed and hook up the negative scanner to post something? (Nah.)

Without further ado, here is the continuation of my concert throwbacks… back to 2001! 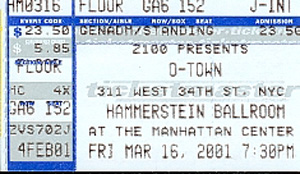 Recap:  My cousin Tiffany took me to this show in New York City, where she was living and going to school. My mom dropped me off with her (along with 2 of her other cousins) and we took the train into the city.  Then we stopped to eat and got to the venue as doors were opening. They had us go up to the balcony for seats and I remember being mad because I wanted to be closer and the security wasn’t very nice.  Clive Davis was at the show and presented the O-Town guys with a platinum record for their debut album!

I can not find a damn thing about Lugo or Mariama Goodman. If you can, let me know!

O-Town is recently back together as a foursome minus Ashley Parker Angel and I will actually be seeing them in 2 days at the casino so look forward to a recap about that probably on “Whatever Wednesday” next week… and it should have pictures too! Yay!