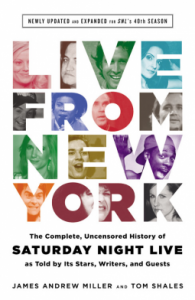 Live From New York is The Complete, Uncensored History of Saturday Night Live as Told by Its Stars, Writers, and Guests.  And when they say it is complete – they’re not lying! The book comes in at over 700 pages and covers the show from 1975 to present day.  The story of the show is told through a series of interviews and quotes, which I thought was an interesting approach – but there’s really no better way to learn about the show than hear about it from the horses mouth. There’s interviews with Lorne Michaels, the writers, musical directors, cast, hosts, etc.

The book is broken down in to 9 chapters :

I was obviously most interested in reading about the more current casts, since these are the shows that I have watched and the cast that I remember the best.  They even chat with Betty White during this part of the book – and really – who doesn’t love Betty White? (and yes, they talk to Justin Timberlake too! You know he was who I was looking for in this chapter for sure!)

The book ends with a bunch of photos from various seasons as well as the cast list for each of the seasons.

This was a really fun, inside look to the show and a really well put together compilation for the show. If you have any interest at all in the show, you should check this book out.

Just in time for the 40th anniversary of Saturday Night Live, a rollickingly updated edition of LIVE FROM NEW YORK with nearly 100 new pages covering the past decade.When first published to celebrate the 30th anniversary ofSaturday Night Live, LIVE FROM NEW YORK was immediately proclaimed the best book ever produced on the landmark and legendary late-night show. In their own words, unfiltered and uncensored, a dazzling galaxy of trail-blazing talents recalled three turbulent decades of on-camera antics and off-camera escapades. Now a fourth decade has passed—and bestselling authors James Andrew Miller and Tom Shales have returned to Studio 8H. Over more than 100 pages of new material, they raucously and revealingly take the SNL story up to the present, adding a constellation of iconic new stars, surprises, and controversies.