October 31, 2014 by ConcertKatie No Comments 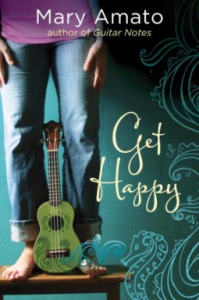 Get Happy is about Minerva, who has just turned 16. She is living with her mom and her father is apparently a horrible man and Minerva should want nothing to do with him. At least according to her mom.  All Minerva wanted for her birthday was a ukelele but her mom got her an ugly sweater and her aunt gave her $20.

But when she intercepts a Fed Ex package sent by her father, she begins to investigate who he may be and finds out that her mother has been lying about his name and who knows what else.

Meanwhile, she and her best friend Fin audition for a job and meet a guy from school Hayes and get him to audition as well.  Another girl named Cassie shows up for the audition and all 4 get the job at Get Happy where they go off to children’s parties as a cowboy (Hayes), Princess (Cassie), Mermaid (Minerva) and Pirate (Fin).

Minerva ends up finding out a secret about Cassie, confronts her father and then her mother.  And a lot of other things happen intertwining all the sub stories but I don’t need to tell you everything that happens.

This is a YA book so it was a pretty quick and easy read, but I really liked it. (Even though I put off reading it for months and months until it was just a couple of days before this review was scheduled to be posted!) The names were all a little bit strange and I’m not sure I’d name my characters Minerva, Hayes or Fin, but once I got past all of that I really grew to like the characters and be involved in their story.

About the Book
In this poignant, realistic, contemporary YA by a state master list star, perfect for fans of Sarah Dessen and Gayle Forman, a young songwriter builds a substitute family with her friends in place of the broken family she grew up with.

Minerva has been raised by her single mother after her father left them both. On her 17th birthday, she is shocked to discover that he has been trying to keep in touch, but her mother has been sabotaging his attempts. Furious at her mom, she begins to investigate her dad, a famous marine biologist, only to discover that he has a new family, including a beloved, and perfect, stepdaughter–a girl Minerva already knows and despises. As she makes her way, trying to build her performing and songwriting career, her jealousy takes over and threatens to derail her life completely. It is only through the efforts of her best friend, Fin, and the introduction of Hayes, a new young man in her life, that she is able to see clearly who she is and who makes up her family.