October 3, 2014 by ConcertKatie No Comments 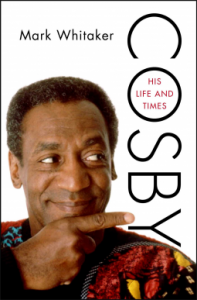 When I was little, I saw Bill Cosby on the cover of TV Guide and thought he was my grandfather.  Since all my grandparents have died I decided that I can pick new celebrity grandparents – so of course I chose Bill Cosby as one of my fake grandfathers! There is now a biography out all about Bill.  It has been compiled by interviews with Bill himself as well as with SIXTY of his closest friends. I don’t know about you, but I think that means that it will pretty much cover everything about his life in great detail.

Cosby has led quite a life, so it is no surprise that this book clocks in at over 500 pages! It’s really hard to sum up everything in just a few words for this review, but if you are a fan of Bill or want to know more about his life and career, then you certainly should read this book because I don’t think you will find a more accurate and thorough representation of his life anywhere else.

The first major biography of an American icon, comedian Bill Cosby. Based on extensive research and in-depth interviews with Cosby and more than sixty of his closest friends and associates, it is a frank, fun and fascinating account of his life and historic legacy.

Far from the gentle worlds of his routines or TV shows, Cosby grew up in a Philadelphia housing project, the son of an alcoholic, largely absent father and a loving but overworked mother. With novelistic detail, award winning journalist Mark Whitaker tells the story of how, after dropping out of high school, Cosby turned his life around by joining the Navy, talking his way into college, and seizing his first breaks as a stand-up comedian.

Published on the 30th anniversary of The Cosby Show, the book reveals the behind-the-scenes story of that groundbreaking sitcom as well as Cosby’s bestselling albums, breakout role on I Spy, and pioneering place in children’s TV. But it also deals with professional setbacks and personal dramas, from an affair that sparked public scandal to the murder of his only son, and the private influence of his wife of fifty years, Camille Cosby.

Whitaker explores the roots of Cosby’s controversial stands on race, as well as “the Cosby effect” that helped pave the way for a black president. For any fan of Bill Cosby’s work, and any student of American television, comedy, or social history, Cosby: His Life and Times is an essential read.