September 8, 2014 by ConcertKatie No Comments 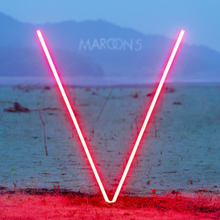 V (pronounced “Five”) is the appropriately titled 5th studio release from Maroon 5.  I liked that the CD started off with the single, Maps.  It helped grab your attention and pull you in because if you listen to any Top 40 radio you should probably know all the words already.  The second track is then Animal which has been popping up in some car commercials lately.  I really like the CD, but I figured that I would because I really like Maroon 5. (Though I am pretty miffed they are not coming to CT on their tour – especially since they are touring with Magic!)  A couple of the songs I felt had a bit of an 80s sound – It Was Always You and Coming Back For You.  I think the keyboard reminded me of some beats I would play when I was a kid. The song Sugar reminded me a bit of Katy Perry’s Last Friday Night and the song Feelings reminded me a bit of American Boy by Estelle.  Anyone else hearing that or am I crazy?

The CD also has a song w/ Gwen Stefani, one of Adam’s new co-coaches on this season of The Voice. (Which I will be watching again, but we’ll see how long that lasts! No plans to post recaps at this time, but we’ll see!)  The song is My Heart Is Open and it was not what I was expecting from a collab with Gwen. It almost has a country vibe going. (Fun fact it was written w/ Sia)  I did enjoy the bonus track which is a cover of Marcy Playground’s “Sex and Candy”. It almost has a loungy feel to it and it was not a cover that I was expecting. This song reminds me so much of 1997 when I used to watch every countdown show ever and had the radio on probably 24/7. (Listening for Hanson, of course.)  And speaking of Hanson… the bonus track Lost Stars was cowritten with Gregg Alexander who also wrote Lost Without Each Other with Hanson. (Which is one of my favorite Hanson songs!)