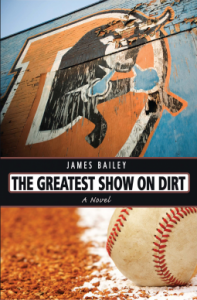 The Greatest Show on Dirt was written by the same author who wrote Nine Bucks a Pound, which I enjoyed reading, so I figured that The Greatest Show on Dirt would be a good read as well. It was a nice escape from the baseball romances that I’ve been reading.  This book is based on Lane – who after a night out with his guys ends up over sleeping and missing an important meeting at work.  This ends up with him getting fired, but his pal Rich works for the Durham Bulls and is able to get him a job there for the summer.

There is quite the cast of characters, aside from the baseball team, who help make the ball park run and tick.  Of course with so many people working, there are bound to be some personalities that clash as well.  There are several sub-plots going on throughout the book – there is a bit of a mystery when items are being stolen from the locker room and no one can pinpoint just who it might be.  Lane and his girlfriend end up breaking up because she doesn’t get to see him any more with the hours he works at the job and she shows up with a rich new boyfriend who seems to be a bit suspicious.  One of the interns seems like she may be interested in Lane, but her childhood friend (boyfriend?) keeps coming around to see her even though she thinks that he is immature and wants nothing to do with him.  One of the groundskeepers is only 12 years old and answers to “Spanky”…

Overall an interesting look in a day in the life of a guy who works at the baseball field and though I probably didn’t do it justice in my recap, a great story. Although I will admit when it ended I kind of wanted to know a bit more of “what happened next” (but don’t I always?)

Minor league baseball is the land of dreamers, where young men endure months on the road, long bus rides, bad food, and constant pressure while they hone their craft and reach for the next rung up the ladder. Like the players on the field, the men and women who work for the teams put in long hours for low pay to be part of the game they love. It doesn’t take Lane Hamilton long to understand the appeal. When he’s fired for sleeping through an important meeting at the bank where he works, Lane hooks on as an operations assistant with the Durham Bulls. Every day at historic Durham Athletic Park brings something new, and despite the grueling hours, Lane’s too busy ducking jealous co-workers and amped-up relief pitchers to ever get bored. Set in the same beloved old stadium where Bull Durham was filmed, The Greatest Show on Dirt provides a look at baseball from a different angle. Players come and go, but there would be no games without a front office to sell the tickets, groom the field, and open the gates to let the fans in. A former Bulls employee who later spent six years covering the minor leagues for Baseball America, James Bailey has crafted a realistic, yet often hilarious, account of a young man’s indoctrination into life in the bush leagues.

Reviewers have lauded the colorful cast of characters, from foul-mouthed, 12-year-old groundskeeper Spanky Paul to subtle middle-aged cougar Faith Andrews, who’s looking to peddle more than t-shirts out of the team’s souvenir shop. Ben Steelman of the Wilmington (N.C.) StarNews says, “Lane’s co-workers are colorful enough to make Damon Runyan’s characters look like the cast of a Henry James novel.” And Tom Hoffarth of the Los Angeles Daily News says, “[I]t’s not just believable, but is easy to imagine as being the starting point for a movie script–even with Bull Durham already a classic. Bailey doesn’t use baseball locker-talk for shock value, but keeps the reader moving at the right pace, fully locked and loaded, trying to figure out how this crumbling old minor-league park will somehow expose the secret to life for at least one person who feels disconnected, but is willing to listen to see if it’s speaking his language.”