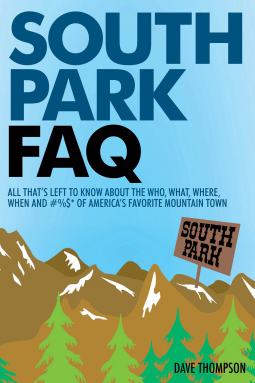 South Park FAQ is 300+ pages of everything you may want to know (or perhaps already know) about the show South Park.  The book dissects episodes and what it is that makes the show so popular and remain popular over 10+ years!  There’s even a list of a bunch of the celebrities that have been imitated on the show (poorly).   One chapter is a break down of who is who in south park with details about some of the lesser known and well known characters that have been on the show.  The next few chapters follow with the A, B, Cs of South Park.

Probably one of the most thorough books about a cartoon that you’ll ever see – but if you’re a fan of the show or just want to catch up on what you’ve been missing for the past 10+ years, then look no further than South Park FAQ to find out the answers to all your questions and everything you’d ever want to know (or not know) about the show and its creators.

There are few modern animated television shows that could survive over a decade and a half and remain as funny… or as stupid… or as sick… or as depraved… today as when they started. Even fewer can claim to cater to “mature” audiences, while their critics complain that everything about the show is immature. And fewer still where, for the first decade or so, one of the main characters was killed off every week. Then returned, no worse for wear, seven days later.

That, however, is the world of South Park, and South Park FAQ is a book about that world. A journey through the lives, times, and catastrophes that have established the tiny mountain town of South Park, Colorado, as America’s favorite dysfunctional community. A voyage into a universe where Barbra Streisand is reborn as a Japanese monster movie; where Kentucky Fried Chicken is a registered drug; where Canada is forever on a footing for war; and where we discover that even feces love Christmas. From Zebulon Pike to Chef, from Brian Boitano to Mel Gibson, from “Super Best Friends” to South Park: Bigger, Longer & Uncut, it’s all covered in South Park FAQ. Featuring A-Z coverage of the all the characters readers have come to know and the stories behind the episodes, it also includes an episode guide and an appendix of all of the songs featured in South Park.

Nothing is sacred and nobody is safe. Even physical and emotional disabilities are just another banana skin for someone to slip on, and the term “politically correct” has been translated into “oh good, you’re getting annoyed.” It is a place where … you get the picture. This is not Bambi!