Book Review: Resisting the Musician (a Head Over Heels Novel) 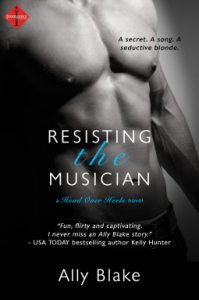 This book took me a while to get through.  I thought once the story got moving I’d get more into it, but it never really ended up getting moving.  Lori owns a shoe company with her sister.  Her sister falls in love with a rock star – which seems to be no problem, right? WRONG.  He was originally the fiance of one of their clients and now he is her fiance… Oops! With all the bad PR they are trying to figure out what to do to turn things around.  Lori turns to Dash, an old bandmate /friend of Jake, Callie’s fiance for help in a gift for Callie to give Jake at the wedding – a song.  He’s a bit stubborn at first, but eventually they work out terms and he begins to teach her to play the guitar so that they have the music for a song for Callie to sing (Callie would write the lyrics).  Of course – then things get a little hot and heavy between them.  There’s some other drama too with Dash thinking that Lori may be using him and his name in order to get some good PR for the company.

This seemed to be a more realistic story than some others I have read, but for whatever reason I just couldn’t get into it. It had all the elements of a book that I should love – musicians, romance, etc. but for whatever reason it took me several days to read (and I fell asleep reading it at least twice!)  I’ll probably give another book in the series another try just in case this one was a fluke though.

Bridal shoe company owner Lori Hanover is in way over her head. First, her designer sister has fallen head over heels for the rock star fiancé of a client – talk about bad PR! Now her business is falling apart. Lori’s only hope in saving her company is making the world believe it was true love, even if she’s not so sure herself. Her best bet? A song. For this she turns to the most frustrating musical recluse in America, Dash Mills, a man who could pass for Thor’s sexier brother. And even though this former rock superstar agrees to help, it comes at a price…

When Lori agrees to Dash’s terms, he thinks she’s the one in for a challenge. But the more time he spends with this spitfire bombshell, the more tempted he is to play her—in more ways than one. But Dash left behind the rock and roll life for a reason. And seductive as Lori may be, if she drags him back into that world, this time he won’t forgive himself…or her.