September 12, 2014 by ConcertKatie No Comments 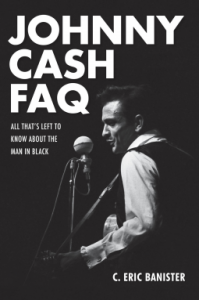 Johnny Cash FAQ is jam-packed with almost 50 chapters and everything you’d ever need to know about the man in black! The chapters chronicle Johnny’s career by year and as with all the other FAQ books I have read – they aren’t really broken down by questions but instead written more like a biography.  Mixed throughout the  text are various photos of Johnny and the records that he has released over the years.  Whether you know nothing about Johnny or are a huge fan – reading this book will leave you with no stone left unturned about Johnny’s life.  This book has “all that’s left to know” in it and is easily your one-stop shop for everything Johnny. From Sun records to his death and everything in between!

Johnny lived an amazing life and had an amazing career.  Don’t believe me? Check out this book.

More than a decade after his death, Johnny Cash remains one of the most recognizable artists in the world. Starting in 1956, he released an album every year until his death in 2003, and there have been posthumous releases in the years after his death. From rockabilly to country, folk to comedy, gospel to classical, the prolific Cash touched them all. His hit singles crossed over from country to pop, as he transcended genres and became a superstar around the globe.

In Johnny Cash FAQ: All That’s Left to Know About the Man in Black (September 2014, Backbeat Books, $24.99), C. Eric Banister explores the remarkable length and breadth of Cash’s career. Cash skyrocketed from the beginning, flying through the ’60s until he was one of the country’s biggest stars by the end of the decade. Following his own muse through the ’70s, Cash slowly faded commercially until he nearly disappeared in the ’80s. Instead of giving up, he made an incredible late-career run in the ’90s that took him into the new millennium, along the way collaborating with various contemporary rock and pop artists.

His offstage problems often overshadowed the music, and his addiction often takes center stage in the story, pushing the music off the page. But Johnny Cash FAQ celebrates the musical genius of Cash and takes a look at every album Cash released, the stories behind the hits, and how he sustained a fantastic nearly 50-year career.