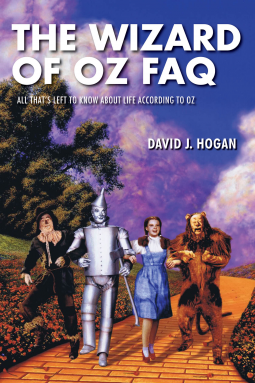 As a kid, I used to take out all of Frank Baum’s Oz books from the library to read.  I’m not sure what it is about that world and those characters that I loved, but even to this day I love all the various versions out there.  So when I saw The Wizard of Oz FAQ available for review, I knew I had to check it out.  The book is almost 500 pages and is jam packed with everything you want to know about Oz (and then some)!  I thought it might be a quick read with questions and answers, but it’s not set up like your typical FAQ – it is instead a very complete book breaking down books, adaptations, etc throughout the pages.  It even ponders Shirley Temple being cast as Dorothy instead of Judy Garland.

I particularly liked the “Merry Old Land of Rumors” which addressed some rumors about the film of MGM’s The Wizard of Oz.  Some are already talked about earlier in the book but others are not. Also included are some of the “oops” in the shooting of the movie.  One night I pulled these up on the computer and tried to find them while we watched the movie on TV but unfortunately they were not in order so it made it harder to find them. I believe this list is in order as they appear in the film.

One of the most in depth looks at Oz you will probably ever find or read.  If you’re a fan of Oz and want to know all there is to know about the history of it – movie and otherwise, then this is certainly the book for you.

The Wizard of Oz FAQ is a fact-filled celebration of the beloved 1939 fantasy masterpiece starring Judy Garland. It’s all here – from L. Frank Baum and his Oz novels to the complete background story of the movie’s conception, development, and shoot, with special attention given to the little-known parade of uncredited directors, casting difficulties, and on-set accidents and gaffes, as well as more than 75 sidebars devoted to key cast members, directors, and other behind-the-scenes personnel.

You’ll find a wealth of fun facts: How MGM overworked Judy Garland before, during, and after Oz; why director Victor Fleming had his hands full with the Cowardly Lion and Dorothy’s other friends; what it was about Toto that really bothered Judy; the physical horrors of filming in Technicolor; the racial Oz gag that was scripted but never shot; when the Wicked Witch was going to be beautiful; why The Wizard of Oz owes a lot to silent-screen star Mary Pickford; the story of deleted scenes, and a full two weeks of shooting that had to be scrapped; why MGM star Mickey Rooney was part of the movie’s traveling publicity blitz; how the Wicked Witch was literally blown off her broomstick one day; the place where lions, tigers, and bears really do live together; singers you hear but never see; the day MGM fired Judy Garland; and much more. Just follow the yellow brick road!