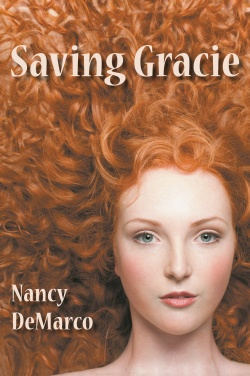 Saving Gracie is a murder mystery at its core – but there are a lot of other sub-plots going on as well with the characters in this small town in New Hampshire.  The main character is Gracie – she may be crazy and is on several medications.  The book begins with her losing a child after giving birth to it.  We then fast forward 52 years.  Gracie is being visited by a red-headed ghost.  She thinks that she sees her head in the lake – but it turns out to be just a purse.  She brings it to the police and tells them what the ghost is telling her – someone is going to die tonight.  The police kind of shrug her off – she is known for being crazy after all – but figure maybe they should believe her when a body is found in the pond.

Things get all sorts of crazy from there as the local officer and the Staties try to figure out just who it was that killed this man and why.  The local officer, Marcel, realizes that maybe these people that he thought he knew his whole life, he doesn’t really know at all.

At first, it took some time for me to get in to this book. I actually fell asleep after reading the first 2 chapters.  But I looked on GoodReads after that and saw that many, many of the reviews were 5 stars so I figured I should try to stick it out and finish it.  And I’m glad I did! Although things got off to a rough start for me, once the story started unfolding I found it hard to put the book down. (Although I did take another break to sleep for the night after getting 2/3 of the way through, I didn’t want to, but it was already 3am and I needed to!)  This is why I always try to continue through books even if they don’t catch my attention in the beginning – I think the fact that the book was 300+ pages was putting me off – although once I got into things it flew by and didn’t seem like that many pages at all.

There were a lot of characters in town, but I didn’t have trouble keeping track of who was who because they all had their little quirks and connections to each other to help me keep track of them all.  I did have trouble keeping track of who was good and who was bad – but I’m pretty sure I was not the only one with that problem! (I won’t say more because I don’t want to give anything away!)

If you are looking for a great murder-mystery with some romance and drama mixed in for good measure – than Saving Gracie is the book for you!

About the Book
Saving Gracie is a small-town murder mystery with plenty of humor, a touch of romance, a hint of paranormal, and enough suspense to raise your heart rate.

When Gracie is accosted by a redheaded ghost, Officer Marcel Trudeau assumes the old gal is hallucinating. Again. But to Gracie the dead girl is real, and her message is urgent—someone will die tonight.

Sure enough, a body surfaces in Echo Pond, and the town of Coyne Falls plunges into chaos. In the furor that follows, the victim’s widow jumps out a window, a dead man sends text messages, a missing person is duct taped to a toilet, and a beagle runs howling into the night.

Meanwhile, the ghost sends Gracie on a mission: “follow the beagle” to save a life.