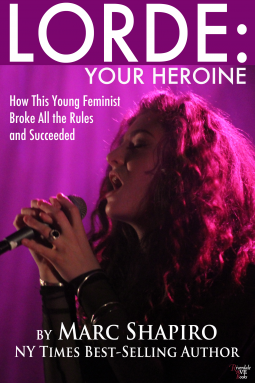 I didn’t know much about Lorde. I know she’s young. I know she has a couple of completely overplayed songs on the radio. That’s about it. So when I saw there was a biography out about her, I was interested to read it to see what I could find out. Now I know her real name is Ella Maria Lani Yelich O’Connor (I can see now why she shortened it!) and that she is quite a smart kid. While it seems that Lorde may have been somewhat of an overnight success, she had been working for a few years before hitting it big, trying to write songs.  Although she seems to have a bit of an attitude about her that she knew it wouldn’t work out and then magically it didn’t work out. (Funny how that happens?)  Though after returning to school she ended up meeting a song writer that she actually clicked with.

Fun fact – the title of the song Royals came from a photo she saw of a member of the Royals baseball team signing baseballs in a magazine.

I certainly learned a lot about Lorde and how she became Lorde and a household name.  How her boyfriend is 7 yrs older than her and how in the beginning she had trouble taking criticism about him. She is also very involved with what has her name attached to it and will shoot down ideas she thinks are “corny”, which I can’t blame her for.

This book is short, only 85 pages, but I imagine a few years down the line it will be much, much longer with more details of her career as she gets older.

Lorde is the voice of her generation, a head-strong, determined young woman who knows what she wants and has known how she was going to get it form an early age.

She’s a renowned feminist, a performer with a minimalist/Goth/Electropop style that is as haunting as it is incredibly enticing and thought provoking.

She’s won two Grammys for her song ‘Royals,’ has captivated audiences all over the world. But guess what? She still lives at home, she still does the dishes and she still goes to school. Quite an accomplishment for a woman who just turned 17.

Marc Shapiro is the NY Times best-selling author of We Love Jenni – An Unauthorized Biography, The Secret Life of EL James, Who is Katie Holmes? – An Unauthorized Biography, Legally Bieber: Justin Bieber at 18, J.K.Rowling: The Wizard Behind Harry Potter, Justin Bieber: The Fever!, Game: The Resurrection of Tim Tebow and many other best-selling celebrity biographies. He is a free-lance entertainment journalist covering film, television, and music for a number of national and international newspapers and magazines.