Book Review: The Who FAQ 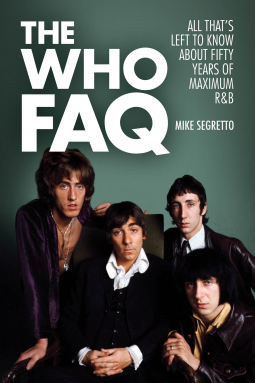 The Who FAQ is All that’s left to know about fifty years of maximum R&B.  Although the book is called “FAQ” there really aren’t any questions in the book.  Each chapter focuses on a different aspect of the band – starting of course with “Who’s Who in the Who” (try saying that 5 times fast!).  Then it goes in to other band members, management, songwriting, unrecorded songs, on film, solo albums, girlfriends and wives and many, many more topics. (35 in total).   Between all the topics it covers everything one would need or want to know about The Who.

This is an interesting approach at a biography, it isn’t quite chronological in its grouping, but information is grouped in a different way than you are used to. I liked this approach though because it kind of “chunked” the information into categories which didn’t make it any more difficult to read or absorb.  There’s a lot of great information and photographs mixed throughout as well.  With it broken down in to smaller sections within each chapter it makes it really easy to read either all at once or here and there when you find yourself with a free moment.

I certainly know a lot more about The Who than I ever thought I would after reading this!

Fifty years after Pete Townshend, Roger Daltrey, John Entwistle, and Keith Moon made their first ruckus together onstage, the world is still fascinated with its greatest rock-and-roll band. Whether their music is popping up in TV commercials and the various incarnations of CSI or the remaining members are performing at the Super Bowl, the Olympics, or multitudinous charity events, the Who have never faded away. Yet while such artists as the Beatles, Bob Dylan, and Led Zeppelin have been pored over, flipped on their backs, and examined from every imaginable angle, the Who remain somewhat mysterious. Questions persist. Who were their most important influences, and which other bands were their most loyal followers? Did they really create the very first rock opera? What were their most important collaborations, gigs, solo projects, and phases? Where do they stand on politics, religion, and philanthropy? The answers to these questions don’t amount to mere trivia but create a clearer portrait of the enigma that is the Who.

Whether they were Mods or punk pioneers, rock Wagners, or a gang of guitar-smashing thugs, the Who is a band beyond categorization or comparison, a band that constantly poses new questions – and The Who FAQ digs deep to find the answers.