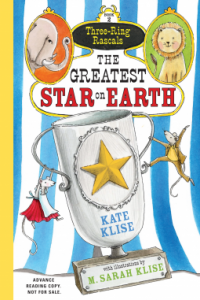 The Greatest Star on Earth is actually the 2nd book in a series.  I have not read the first and didn’t feel like I was missing out on anything because of it.  The book is about Sir Sidney’s Circus – which is the best in the world!  The Circus Times writer knows this – but as decided that she wants to try and figure out who is the greatest star in the show?  Sir Sidney finds out about this and that there is only one trophy and ends up giving himself a worry wart.  His doctor sends him off to rest and the performers start over thinking about what they want to do to win the trophy.

One by one under the instruction of the new ringmaster Barnabas, the stars start getting injured because they are trying to impress the writer in order to win the trophy.  Meanwhile, Barnabas isn’t that great at managing the crew so 2 of the mice start telling him what to do by writing him a book and making up rules for him to follow so they won’t be fed goop!

Who ends up the star of the circus? Does Sir Sidney’s worry wart go away? Find out all this – and more! In The Greatest Star On Earth.

This was a super cute kids book, with a great moral to the story.  I had been putting off reading it for quite some time because it was over 100 pages – but it actually went super quick as the book is part text, part comic with illustrations and thought bubbles and a few of the letters and book chapters and newspaper clippings are included as well.  I think I ended up reading it in under an hour – so this would be a great weekend read for your young reader!

The rascals from the world’s friendliest family circus are back in the second installment of this “smafunderful”* fully illustrated series.

Everyone knows Sir Sidney’s Circus is the best in the world. But who’s the star of the show? The Circus Times is having a contest to find out. Just thinking about it gives Sir Sidney a worrywart, and it’s quickly clear why. Soon after he goes off to rest, the performers start thinking too much about winning the trophy and not enough about putting on a good show.

Meanwhile, it looks as if ringmaster-in-training Barnabas Brambles might need some help managing the crew, so Bert and Gert, the sly brother-and-sister mice who travel with the show, set out to write a book to teach him how it’s done.

Does Bert and Gert’s plan work? And who is the star of the circus? All will be revealed in The Greatest Star on Earth.