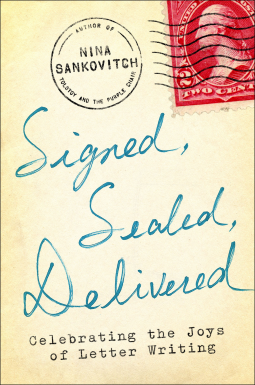 Signed, Sealed, Delivered is a book about the joys of letter writing.  For me, it didn’t deliver as I was expecting to read more letters than book and that is not what happened.  The author talks about her love for letter writing (Call me old fashioned, but I love it too) as well as the first letter she ever received from her son, some letters that she found in a trunk when she bought a new house and other letters through history.

I guess I was hoping for it to be more “hands on” with the letters throughout the book instead of just Nina’s talking about the letters.  Great historical aspect to the book, but that’s not usually my thing.

The bibliography did list several other books that are supposed to contain letters so maybe I will find what I was looking for in one of those books instead.

If you go in to this book for the historical aspect of letters and how they are special, and don’t expect to see more than some excerpts of letters then I think you will enjoy this book just fine.  It was a quick and interesting read once I realized what it was was not what I was expecting!

The author of the much-admired Tolstoy and the Purple Chairgoes on a quest through the history of letters and her own personal correspondence to discover and celebrate what is special about the handwritten letter.

Witty, moving, informative, and inspiring, Signed, Sealed, Delivered begins with Nina Sankovitch’s discovery of a trove of 100-year-old letters written by a Princeton freshman to his mother in the early 1900s. Nina’s own son is heading off to Harvard and she wants him to write to her, as the Princeton student wrote his mother and as Nina wrote hers. But times have changed. Before Nina can persuade her child of the value of letters, she must first understand herself exactly what it is about letters that makes them so special.

Sankovitch sets off on a quest through the history of letter writing—from the ancient Egyptians to the medieval lovers Abelard and Heloise, from the letters received by President Lincoln after his son’s death to the correspondence of Edith Wharton and Henry James. Sankovitch looks at the power of letters through epistolary novels, her husband’s love letters, and dozens more sources—including her son’s brief reports from college on the weather and his allowance.

In this beautifully written book, Sankovitch reminds us that letters offer proof and legacy of what is most important in life: love and connection. In the end, she finds, the letters we write are even more important than the ones we wait for.