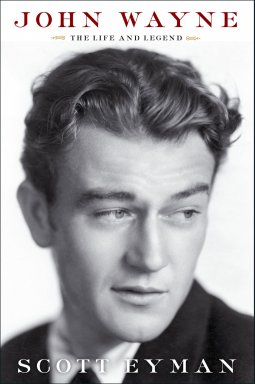 John Wayne – The Life and Legend – tells the story of John Wayne using interviews that the author conducted with John before he died.  In addition to the interviews with John himself, the author Scott Eyman also conducted interviews with John’s family, friends, co-stars and other acquaintances to accurately put together a biography of John Wayne.  I decided to check out this book because John’s granddaughter, Jennifer Wayne, is currently on the Amazing Race and I met her and her band (now ex band) Stealing Angels when they were doing a radio tour a few years back and it got me interested in finding out more about John.

This book is incredibly thorough and has everything you’d want to know about the actor – it is just under 700 pages total – with almost 600 of those being the meat of the book and the interesting content that isn’t notes and citations.

The book is broken down by years – going in chronological order of John’s life – starting in 1907 and ending in 1979.

If you are a fan of John Wayne or just want to know more about the legendary actor – this is the book for you to check out!

Drawing on interviews that author Scott Eyman conducted with John Wayne before his death and more than 100 interviews with the actor’s family, co-stars, and close associates, this revelatory biography shows how both the facts and fictions about Wayne illuminate his singular life.

John Wayne died more than thirty years ago, but he remains one of the five favorite movie stars of contemporary audiences. Yet, there has never been a comprehensive biography worthy of the man as well as the star. Until now.

The beloved Hollywood icon comes fully to life in this complex portrait by a master biographer whose skillful prose has been hailed as “outstanding” and “compulsive reading” by reviewers from The New York Times to The Hollywood Reporter.

The Washington Post Book World called Scott Eyman “one of the most distinguished and reliable of popular film historians.” In Eyman’s hands, this enduring symbol of American grit gets the biography he deserves.

Exploring Wayne’s early life with a difficult mother and a feckless father, Eyman makes startling connections to his later days as an anti-Communist conservative, his stormy marriages to Latina women, and his notorious—and surprisingly long-lived—extra-marital affair with Marlene Dietrich.

In addition to his interviews with those who knew Wayne best—many of whom had never spoken on the record before—Eyman draws on the actor’s own business records to weave a rich tapestry of American cultural history: the story of a man who went from college football to romantic lead on the silver screen, and who ultimately became the dominant—and often domineering—symbol of his country at mid-century, the quintessential American male against which all other screen heroes are compared.

Through it all, the author provides a nuanced and sympathetic portrait that is as charming, compelling, and complicated as the Duke himself.