Book Review: The Bambino and Me 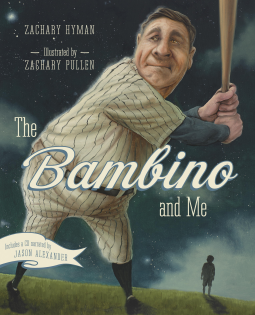 The Bambino and Me is an awesome book.  It tells the story of a kid growing up in the 1920s that is a HUGE Babe Ruth fan. The kid, George, is also a huge Yankees fan so when Babe gets traded to The Yankees he hopes that he and his dad can go see his idol in person.  For his birthday, he gets tickets to see the Yankees vs the Red Sox and his uncle sends him a baseball jersey and cap from Boston.  George wants nothing to do with this jersey at all (what Yankee fan would?) but his mother tells him he has to wear it to the game!  He gets picked on the whole way to the game and the whole time he is at the game.  All George wants is to meet his idol, Babe Ruth.  After the game, two guys grab George and take him away.  But what is going to happen? Is he in trouble for wearing a Red Sox jersey?

I thought this book was a super great story and the illustrations are just out of this world amazing.  Apparently the actual book comes with a CD of Jason Alexander narrating the story – which would probably make things even more perfect, I am kind of bummed I didn’t get to hear his narration!  It is short but a great story and I just can’t say enough good things about it.

A picture book that perfectly conjures 1920s New York for fans of baseball and Babe Ruth. This book also includes a CD narrated by Jason Alexander!

George Henry Alexander is a huge fan of baseball. His favorite team is the New York Yankees and his favorite player is Babe Ruth. George plays baseball during his free time and he listens to the games on the radio with his dad. Everywhere he goes, he carries his Babe Ruth baseball card.

On his birthday, George’s parents surprise him with two tickets to watch the Boston Red Sox and the New York Yankees–his first real game! But his presents don’t stop there. Uncle Alvin has sent him a baseball jersey and cap, but it’s for the Boston Red Sox! Filled with horror, George tosses them aside, but his mother will not have any of that. He will wear them to the baseball game with his dad!

What will happen at the game? Will George get to meet Babe Ruth while wearing the opposing team’s jersey?