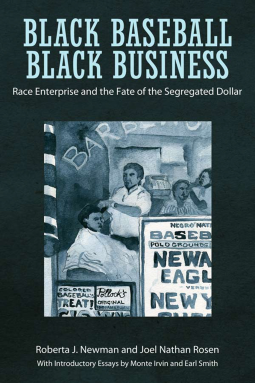 Black Baseball, Black Business, Race Enterprise and the Fate of the Segregated Dollar tells the story of desegregating baseball. It takes a look at the history of baseball from the perspective of the Negro Leagues which is not something I’ve read so much about before, but it is certainly an important part of baseball (and America’s) history.  The book also looks a bit at the economy as well as it relates to the times being written about and the Negro Leagues (also not accurate as the teams were made up of both African Americans as well as Latinos.)

The book is an attempt to contextualize the business of black baseball as well as to examine its role as a bellwether for the fate of the segregated dollar from the establishment of the large urban communities fed by the Great Migration to the dawn of the civil rights movement. Baseball as played between the lines is secondary to this work. (pg. 34)  I think that the book does a good job sticking to the scope that it had cut out for itself.  It very easily could have added in many more aspects to the culture in to the book, but it did a good job of keeping topics limited, concise and full of wonderful information.  Truly brilliantly researched and presented and written in a way that will not leave the reader bored as a history book might.

Once Jackie Robinson and a select handful of black baseball’s elite gained acceptance in Major League Baseball and financial stability in the mainstream economy, shock waves traveled throughout the black business world. Though the economic impact on Negro League baseball is perhaps obvious due to its demise, the impact on other black-owned businesses and on segregated neighborhoods is often undervalued if not outright ignored in current accounts. There have been many books written on great individual players who played in the Negro Leagues and/or integrated the Major Leagues. But Newman and Rosen move beyond hagiography to analyze what happens when a community has its economic footing undermined while simultaneously being called upon to celebrate a larger social progress. In this regard, Black Baseball, Black Business moves beyond the diamond to explore baseball’s desegregation narrative in a critical and wide-ranging fashion.

Roberta J. Newman, Brooklyn, New York, is master professor in the Department of Liberal Studies at New York University. Her work has appeared in the journals, Cooperstown Symposium: 2009–2010, and NINE: A Journal of Baseball History and Culture. Joel Nathan Rosen, Allentown, Pennsylvania,is associate professor of sociology at Moravian College in Bethlehem. He is coeditor of A Locker Room of Her Own: Celebrity, Sexuality, and Female Athletes; Fame to Infamy: Race, Sport, and the Fall from Grace; and Reconstructing Fame: Sport, Race, and Evolving Reputations, all published by University Press of Mississippi.