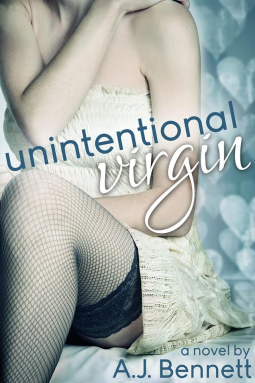 Unintentional Virgin tells the story of Karma Points (Yes, that’s really her name) who is about to turn 20 years old and decides that is about time that she loses her virginity. For whatever reason every time she thought things were going to happen for her in the past, something would happen to cause nothing to happen between her and the guy and she’s had enough!  Her good friend Eva decides that the two of them will go to a club and she can pick up a guy for a one night stand.  She ends up talking to a few guys and ends up going home with the bouncer, Jax.  Jax knows that she is looking for a one night stand, but once he finds out that she is going to lose his virginity to him – essentially a stranger – he can’t follow through with it.  Thinking she is defeated once again, they make a deal. She will spend three weeks dating him and then at the end of the three weeks if she still wants to have sex with him, they’ll do it.

She had told him while drunk that having a one night stand was on her bucket list and that is why she wanted to do it.  When they start dating, Jax asks her to bring her bucket list – except she doesn’t really have one.  Her Dad tells her to make one quickly while her Dad’s partner Matt tells her to just print something off the internet because they are all over the place if you just Google.  So she decides to print something without looking at it – other than to add “HAVE SEX” as #1 on the list.  This leads to a few interesting dates – where Karma ends up terrified because things like “give blood” and “go bungee jumping” end up on the list!

While probably not a typical love story by any means (what guy would actually say no I won’t have sex with you – we need to date 3 weeks first!? Jax is a keeper…) it was a cute story and I enjoyed reading it to see what would end up happening at the end of the three weeks – would it be all that she had thought it would end up being like? Would they stay together after the three weeks even though that wasn’t the deal? (But the two seem to be falling or each other?)

One night, her good friend Eva brings her to an underground club where Karma meets a tattooed bouncer. He’s far from the clean-cut type she normally falls for, which makes her think this might finally be the night she crosses the threshold of womanhood.

Excited, she goes home with the bouncer named Jax and as always, her dreams crash down once again. Jax cannot believe she is willing to give away her virginity to a stranger she met at a club. As the only son with five sisters and a widowed mom, he can’t morally go through with it, even though he’s never been more tempted in his life.

Unwilling to let her walk away he strikes a deal. Karma has to spend three weeks dating him and then decide if she wants to have sex or walk away.