February 23, 2014 by ConcertKatie No Comments 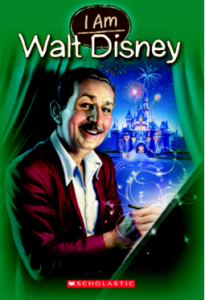 Scholastic has a new series of books called “I Am”.  #11 is dedicated to Walt Disney.  The book tells the story of Walt’s life and in an easy to read way as the series is geared towards kids.  It includes all sorts of information and photos as well as a list of all the people you’ll meet in the story and who they are right away. When the book ends there are a couple of top 10 things to know and top 10 cool things to know about Walt.

This is a quick and easy read, 130 pages. I am hoping to read some more from the series!

I am the creator of Mickey Mouse. I am Walt Disney.

As a child, I had a wild imagination and a great curiosity. As I grew up, I used those qualities to become a cartoonist. Eventually, I turned these drawings into films and began my own animation business. One of my characters, Mickey Mouse, became so popular that movie theaters sold out and I won an Academy Award. After pursuing a career as a film producer, director, screenwriter, voice actor, entrepreneur and entertainer, I added developer to my resume when I created Disneyland amusement park. I became tremendously successful and beloved by children of all ages because of my belief that even the impossible is possible. I am Walt Disney.

To this day, Walt Disney’s characters remain some of the most recognizable images in the world. With books, TV shows, films, and amusement parks devoted to his creations, the Walt Disney name lives on. Learn all about this remarkable man’s fascinating life in Scholastic’s biography series, I AM.