January 9, 2014 by ConcertKatie No Comments 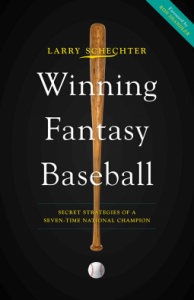 I’ve been in a fantasy league a couple times – I won once and haven’t played since. My Dad and brother have teams and friends and at times it as if they are speaking another language! (Although the mopey ‘I’m in last place’ I understand!)  When I saw the Winning Fantasy Baseball book I knew I had to check it out not only in case I wanted to join a league again this year but s I could understand my Dad and brother!

The book is incredibly thorough and incredibly imformative. Whether you’ve played before or not, you’d be sure to learn something.  There is information on different types of drafts and how to use them to your advantage, all sorts of ways to calculate a players value (but don’t forget injuries!) And tips like not to pick your favorite players just because you like them. (I love having the cutest team though!)  The author is a Red Sox fan and aid he the price isn’t right he’d pass on one of his guys, but if the price was right he’d snag a Yankees player without hesitation.

Overall if you are into fantasy baseball even the tiniest bit you’ll definitely want to heck this book out in preparation for the 2014 season!

Play smart. Play to win. Play like a champion.

In Winning Fantasy Baseball, Larry Schechter discloses the secrets of his proven methods. Packed with commonsense, easy-to-use strategies for beginners through experienced players, Schechter supplies readers with a toolkit to achieve the most important thing in fantasy ball–winning! Some have called Schechter one of the best fantasy baseball players in the world. He is the only two-time winner of the CDM Sports national salary-cap challenge, having defeated 7,500 competitors in 2002 and 6,000 in 2005. He is also a five-time winner of the renowned Tout Wars experts league and a member of the USA Today-sponsored League of Alternative Baseball Reality (LABR).

Readers will learn directly from the champ everything they need to know about:

– how to project player stats;
– how to convert those stats into a specific value;
– strategy for snake drafts, and mono-league and mixed auctions;
– selecting teams using a salary cap;
– playing in keeper leagues;
– and performing in-season management.


Although the book is primarily about fantasy baseball, many of the concepts also apply to fantasy football and other fantasy sports.