January 16, 2014 by ConcertKatie No Comments 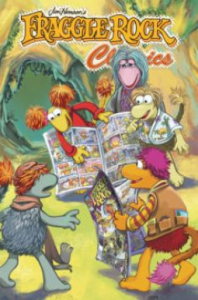 This Fraggle Rock Comic Book was quite a blast from the past. I used to LOVE Fraggle Rock as a kid. (I may even still know the theme song…)  Although this is Volume 2, I am not sure I missed anything by jumping into it first, because the stories seem to be all separate.  There are 4 different stories in the book (though most have multiple parts) and all your favorite characters from the 80s are there! These look great – they’ve been digitally remastered from the comics that were released back in 1985.

Archaia Entertainment and The Jim Henson Company are proud to present a new reprinting of the original Fraggle Rock comic book series, which first debuted in 1985.

Completing the full original run, Volume 2 brings fans madcap adventure with stories such as “The Mean Genie,” “Exploring the Unknown,” “The Great Radish Caper,” and “The Greatest Race There Ever Was.”

Digitally remastered and beautifully bound in softcover for a new generation of Fraggle Rock fans, this series will make you want to dance your cares away — ’80s style!