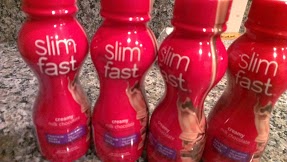 I was sent a coupon for slimfast through Influenster in order to try it out. I wasn’t sure if I was going to like it, but I don’t typically have breakfast and figured it wouldn’t hurt to try and have breakfast of one of the slimfast shakes for a week.  I had never tried it before and initially I thought it smelled kind of bad – but it was chocolate so how bad could it be?  It actually was very good.  The first day I was still hungry (or more hungry than I would have been without it) immediately after finishing it – but as I continued to drink them and the week went on I was able to push back when I ate my lunch and wasn’t going home starving every night.  I also wasn’t feeling guilty for eating something like cookies for breakfast because the slimfast is low in calories and high in protein. I would certainly recommend this problem and I will not hesitate to drink them again!