Book Review: Stir Me Up

December 18, 2013 by ConcertKatie No Comments 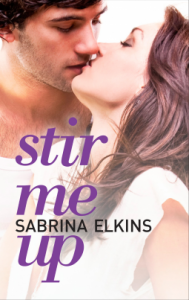 This book made me crazy and I don’t know why.  I think because Cami’s best friend is so much like my best friend.  Not so much with the rest of the story.  But, anyway. The book is about a girl named Cami who is a senior in high school.  She works at her Dad’s restaurant and wants to be a chef.  Her boyfriend works there too.  And sometimes she sneaks out of her house to go meet up with her boyfriend and her Dad and Step-Mom have no idea.  Then Cami’s Dad tells her that her step mom Estella’s nephew, Julian, is in the hospital because of injuries he got during the war. He lost a leg and is hurt pretty badly.  Estella practically raised him so she is going to the hospital to see him and he wants Cami to go with her.  At first Cami wants nothing to do with it but she goes along and realizes that Estella is so frazzled she really needs Cami’s help.  Julian screams for them to get out of his room and is just a really awful guy.

Estella tells Cami that since her room is on the first floor, Julian will be taking it when he moves in to recover.  Cami will be moving in to a small alcove upstairs.  Cami hates the idea and doesn’t know why they have to have this jerk moving in.  He ends up moving in early and Cami hadn’t moved her stuff out of her room yet because she wasn’t expecting him.  The two are constantly fighting, Cami won’t put up with his attitude and dishes it all right back  to him.  She actually throws dishes she has prepared for him to eat at him.

One Tuesday the family is having dinner and Cami invites Luke and her BFF Taryn.  Luke and Julian are not getting along at all, and Taryn realizes that it is because Julian likes Cami and Luke has caught on to that. Cami doesn’t think so but once she starts paying attention she realizes Taryn may be right and after they share a kiss, Cami breaks up with Luke.

The two end up having a secret relationship but soon Estella figures it out.  She tells them to make sure Cami’s dad doesn’t figure it out.  But not too long after he comes home unexpectedly and catches them together.  Cami’s dad makes Julian move out to Estella’s son’s house – where he’ll have to go up several flights of stairs. When he’s just learning how to deal with his prosthetic legs.  Cami tries to get her Dad to realize that Julian isn’t a terrible guy but doesn’t have much luck, but the two continue seeing each other.

They make a plan – Julian doesn’t want to hinder Cami’s plans for the future so they both pick what they want to do and can’t tell each other.  It is killing Cami and she doesn’t know if she should go to college or just become a chef and work in a restaurant – her dad is pushing her to go to college but she’s not sure it’s what she really wants.  Cami decides to travel the world staying with different friends and family and working in different restaurants.  She doesn’t know what Julian is doing and won’t find out until they have already gone their separate ways… or have they?

As soon as Julian moved into the house I KNEW that he was going to end up with Cami.  But I didn’t know how the parents would end up reacting since they are “step-cousins”… I found the characters to be very relatable and I was just completely brought into their world when I was reading this book – it was really well written from Cami’s perspective.  There are some more mature content and situations in this book and it is recommended for 16 and up. It is a Harlequin Teen novel, after all.

Cami Broussard has her future all figured out. She’ll finish her senior year of high school, then go to work full-time as an apprentice chef in her father’s French restaurant, alongside her boyfriend, Luke. But then twenty-year-old ex-Marine Julian Wyatt comes to live with Cami’s family while recovering from serious injuries. And suddenly Cami finds herself questioning everything she thought she wanted.

Julian’s all attitude, challenges and intense green-brown eyes. But beneath that abrasive exterior is a man who just might be as lost as Cami’s starting to feel. And Cami can’t stop thinking about him. Talking to him. Wanting to kiss him. He’s got her seriously stirred up. Her senior year has just gotten a lot more complicated….

Contains mature content and some sexual situations. Suited for readers 16 and up.

“Fun, steamy, and leaves you hungry for more. Sabrina Elkins nails the vulnerability of becoming an adult and the choices that come with growing up.” —Katie McGarry, author of Dare You To