December 2, 2013 by ConcertKatie No Comments 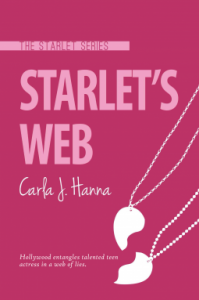 Starlet’s Web is apparently supposed to be a memoir but I didn’t realize that until I re-read the little blurb when I was about to write this review.  The book is about teen actress Marie Michael.  Her mother is also an actress and they often compare themselves and Hollywood to a spider web.  Sometimes you’re the web, sometimes you’re the spider and sometimes you’re the fly wrapped up in the web.  Her career began taking off when she was 14 years old and she is about to turn 18 when the book begins.  She is dating a co-star but has to break up with him in order to get people to like her more – her ratings are slipping because people think she has it all.

Her co-star knew that she wasn’t that into him, she’s actually in love with her childhood best friend Manuel.  He’s in love with her too, but neither of them seem to have the guts to tell each other.  Finally she reveals how she feels and the two begin dating.  Except that Manny has a HUGE character flaw in that he can not separate Lia, the girl he has known his whole life and Marie and her movie star life.  He gets angry that she is kissing co-stars on set and can’t handle the fame and paparazzi.  I kept thinking that this was going to break them up (and I kind of hoped it would – because even though I spent half the book rooting for them to get together, once they were together I hated it.) but it didn’t. Although, this is only the first book in a series so you never know…

The other major plot in the book was that Marie had misplaced her pills that she thought she was taking for POS.  She can’t remember her doctors last name and doesn’t know the prescription number, so Manny takes her to the doctors office. Turns out the office is for cancer patients and Marie’s mom has been giving her chemo in an effort to make her “forever young” so she can play the role she is known for – forever.  Because chemo messes up your immunity system she’s also been taking booster pills and it is not until she arrives at the doctors office to find he has run out of town that she finds out what has been going on. The new doctor is investigating the old and wants to run a ton of tests to see what kind of effects these pills have taken on her, since she doesn’t have cancer.

I thought that plot line was a bit outrageous. I know that Hollywood wants to find a fountain of youth and all that, but it seemed a bit extreme.  Otherwise the story was ok, a typical YA romantic book.  It is the first in the series and I can’t say for sure whether I will bother with #2.

Liana Marie Michael writes her first memoir, Starlet’s Web, as she deals with the consequences of being a teen actor, torn between mixed-messages from Hollywood’s focus on being sexy. She talks in monologues and thinks in scripts as do her entertainment industry-consumed peers. Her love-interest, student athlete Manuel Biro, provides an alternative perspective. But as truths are revealed, what is real is in question.