December 11, 2013 by ConcertKatie No Comments 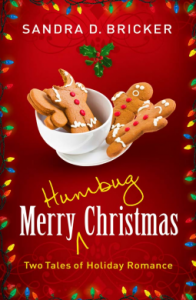 Merry Humbug Christmas is 2 books in one.  The first story is Once Upon a Jingle Bell.  Joss hates Christmas and every years gets away with her best friend Reese to avoid the holiday.  She was born on Christmas and he parents named her Merry Christmas – a name that went great with her last name, Snow.  Due to this she’s not much of a fan of the holidays and with her parents both having passed on, there is no reason to stick around for the holiday.  She had Reese had made a pact and they would spend every Christmas together avoiding Christmas – unless one of them got engaged.  Well, when Joss calls up Reese to book their trip on the “Bah Humbug” cruise – Reese says she can’t go – so Joss of course knows that she and her boyfriend have gotten engaged!  Reese goes off to spend the holidays with her in-laws and Joss heads off for the cruise alone.  Except that her Humbug cruise was canceled and instead she is booked on a 12 days of Christmas cruise!  Just what she wants to deal with.

She considers just hiding in her room and tries to find flights back from the cruise stops to LA but has no luck.  Except that depending on how you look at things that was actually tremendous luck.  She meets a cute guy on the cruise (actually, she meets him when he barrels into her before she boards) and they immediately seem to hit it off and hang out.  But she isn’t sure if she wants to be with Patrick after the cruise – but a phone call to Reese makes her realize she’s just a bit scared.  She promises to say goodbye to Patrick and his mother before the leave the cruise but when trying to get in contact with him – her phone falls overboard.  Perfect, right? Now how will she ever find Patrick?

A cute story although I find it a bit ridiculous that someone on a Bah Humbug cruise would be rebooked on a 12 days of Christmas cruise.  Although I suppose without that there would be no story so I tried to ignore it and let it slide!

The second book is It Came Upon a Midnight Deer. This book is about Reese – who finds out she was named after a Peanut Butter Cup and follows what she was going through at the same time as Joss’ story was going on in the previous story.

Reese seems to be involved in a series of unfortunate events – it all starts when her and her fiancé Damian hit a deer on the way to his parents vacation home to meet the family.  The car gets stuck so they have to walk (in fancy boots, not practical ones!) to the house.  When they try and retrieve the car, Reese ends up running over Damian’s brothers foot! She ruins Christmas dinner, she sets the house on fire, among other things.  Reese is convinced that the wedding is off and his family hates her, but stuff happens and they are all pretty accepting of her – and enjoy making fun of her mishaps as well!

Then Reese gets home and meets back up with Joss and her new crew for their New Years Eve tradition.

Will they both like Christmas more or less now? I don’t know…

A Merry Humbug Christmas features two holiday romance novellas from hilarious and heartwarming author Sandra D. Bricker. — the perfect gift to yourself or someone else at this most wonderfully stressful time of year.

In “Once Upon a Jingle Bell,” A Bah! Humbug cruise to the Mexican Riviera is Joss Snow’s answer to this year’s quest to avoid the holidays completely; at least until she’s rebooked on a different kind of cruise altogether. Candy canes, holly wreaths, reindeer and ornaments seem to be stalking her on the12 Days of Christmas holiday cruise extravaganza. An escape back to land is her only goal . . . until she meets a kindred spirit in rugged Irishman Patrick Brenneman, and then the game is on! Avoid Christmas festivities at all costs . . . except maybe for that one stop under the mistletoe.

In “It Came Upon a Midnight Deer,” Reese’s guilt over abandoning best friend Joss on their holiday tradition of avoiding all things Christmas is trumped by the joy of her recent engagement. Meeting Damian’s family for the first time on idyllic Sugarloaf Mountain is about as far from that Bah! Humbugcruise as she can get, and Reese can hardly wait to get there. But from the moment they hit that deer in the road just two miles from the cabin, everything seems to go wrong. There are no drummers drumming or pipers piping this particular year! And once she sets her future in-laws’ family cabin ablaze, she’s pretty sure there won’t be even ONE golden ring in her future.