December 10, 2013 by ConcertKatie No Comments 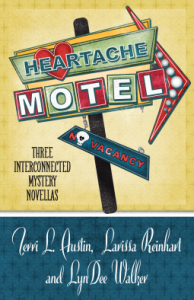 Heartache Motel is 3 stories in 1, all revolving around the seedy heartache motel in Memphis, TN.  Some of the stories are sequel and 1 is a prequel – none of these had I read before.

I think that my favorite of the 3 was the first story – Diners Keepers, Losers Weepers which follows a diner owner, a couple of her waitresses and 2 guys on a trip to Graceland just before the Christmas holidays.  While they had originally made reservations at another hotel their room was given away and they are told about the heartache motel by an Elvis impersonator who is also staying there.  When that impersonator turns up dead, Rose and her friends find themselves wrapped up in a murder mystery – one which she feels she absolutely must solve – but before Christmas so she can get home in time to spend time with her guy and family.

The second is quick sketch which is all about a poker-ring being set up to try and win some money for Byron who had been had by some professional scammers.  This one had a lot of people doing stupid things and it was no surprise that they got caught.

The third book – Dateline Memphis was probably my 2nd favorite.  A reporter decides to go to Memphis with a stop at Graceland to pick up a gift for her mother.  While she is there, Graceland gets put on lock down.  Someone stole one of Elvis’ belts after a little girl supposedly tapped the glass to hard shattering a display.  All while having a dying battery, reporter Nichelle tries to solve the mystery from the inside since the cops are backed up and who knows how long it will take for them to get there.  While reporting from the inside Nichelle gets some notoriety and helps the cops figure out what was going on not only with the belt, but with an Elvis coin scam that was going on too.

Elvis has left the building, but he’s forever memorialized at the Heartache Motel. Filled with drag queens, Rock-a-Hula cocktails, and a vibrating velveteen bed, these three novellas tell the tales of three amateur sleuths who spend their holidays at the King’s beloved home.

When Rose and the gang head to Graceland right before Christmas, they get all shook up: the motel is a seedy dump and an Elvis impersonator turns up dead. Rose discovers missing jewels tie into the death and her suspicious mind flips into overdrive, questioning her fellow guests, the staff, and even a cute impersonator who keeps popping up. Will Rose be able to find the murderer and get home by Christmas day? It’s now or never.

Sassy Southern artist Cherry Tucker and her poker-loving boyfriend, Todd, pop into Memphis to help Todd’s cousin who’s been hustled out of his savings, right before Christmas. Staying at the shady Heartache Motel, Cherry can’t tell a shill from a mark and fears everyone is playing them for chumps. Cherry and Todd quickly find themselves in a dangerous sting that could send them to the slammer or mark them as pigeons from cons looking for an even bigger score.

Crime reporter Nichelle Clarke thinks she’s going home for Christmas. But a quick stop at Graceland proves news breaks in the strangest places. When the King’s home gets locked down with Nichelle inside, she chases this headline into the national spotlight—and the thief’s crosshairs. Christmas dreams of blue suede Manolos fade, and all Nichelle wants from Santa is to land the story before the thief cuts off her news feed for good.

Part of the Henery Press Mystery Series Collection, if you like one, you’ll probably like them all…

TERRI L. AUSTIN As a girl, Terri L. Austin thought she’d outgrow dreaming up stories and creating imaginary friends. Instead, she’s made a career of it. She met her own Prince Charming and together they live in Missouri. She loves to hear from readers!

LARISSA REINHART After seeing Paper Moon as a child, Larissa Reinhart fell in love with stories about confidence capers. QUICK SKETCH is the Cherry Tucker prequel to PORTRAIT in the mystery anthology THE HEARTACHE MOTEL. HIJACK IN ABSTRACT is the third in the Cherry Tucker Mystery Series from Henery Press, following STILL LIFE IN BRUNSWICK STEW (#2) and PORTRAIT OF A DEAD GUY (#1), a 2012 Daphne du Maurier finalist. She lives near Atlanta with her minions and Cairn Terrier, Biscuit. Visit her website larissareinhart.com or find her at on Facebook.

LYNDEE WALKER LynDee Walker grew up in the land of stifling heat and amazing food most people call Texas, and wanted to be Lois Lane from the time she could say the words “press conference.” An award-winning journalist, she traded cops and deadlines for burp cloths and onesies when her oldest child was born. Writing the Headlines in Heels mysteries gives her the best of both worlds. LynDee adores her family, her readers, and enchiladas. She often works out tricky plot points while walking off the enchiladas. She lives in Richmond, Virginia, where she is working on her next novel. Find her at www.lyndeewalker.com.