December 16, 2013 by ConcertKatie No Comments 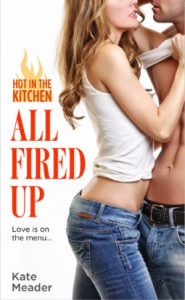 Shane is the new pastry chef at Cara’s soon to be brother in law’s restaurant.  Cara works as an event planner for them.  After a trip to Vegas, Shane and Cara end up married.  Once Cara realizes what she has done, she wants an annulment.  Shane seems to think that they can make it work if they get to know each other a bit better.  But there is one big secret that he is keeping – Cara’s soon to be brother in law, Jack, a famous chef is his half-brother. Jack has no idea but Shane has been trying very hard to get the job to work with him so that he can finally meet him. There’s also the new secret – Cara doesn’t want anyone to know that they’ve gotten married.

Cara get annulment papers but her relationship with Shane starts heating up.  She tries to fight it as much as she can but she knows inside it is what she wants.  Once Shane signs the papers and the truth about his paternity comes out, Cara isn’t sure if he was just using her or if he ever cared for her at all – when she has been falling in love with him.

This was a good book, but I couldn’t help but get SO annoyed by Cara.  She obviously has a lot of control issues and needs to be in control of everything. She thinks her family hates her because she wasn’t around when her mother got sick with cancer.  Turns out, she was battling anorexia and didn’t want anyone to know and that is why she didn’t come home. Shane seems to be willing to accept her for who she is, but she can’t accept herself which I think is what initially causes her to not want to be with Shane. But here is this hot guy who wants you for you and you keep walking away!

I thought the end was going to take a bit different turn than it did – but I was happy with how everything was resolved.

Cool as a Chicago winter, private events planner Cara DeLuca is a model of self-control . . . until she meets the one temptation she can’t resist: Shane Doyle. The sexy, Irish pastry chef is too hot, too sure, too young, and after a crazy night in Vegas-her new husband. While at first Cara wants nothing more than a way out of her sham marriage to Shane, she soon finds that beneath his farm boy demeanor lies a man who can match her drive, both in and out of the bedroom. How can the wrong guy feel so deliciously right?

Shane has carefully structured his career and life around one goal: connecting with the family that doesn’t know he exists. Marrying a woman with more issues than a magazine stand wasn’t part of the plan, but melting Cara’s icy exterior is so worth the detour. Now as the annulment date nears and long-buried secrets are revealed, Shane will have to fight for the one thing guaranteeing the perfect life he craves . . . the current Mrs. Shane Doyle.