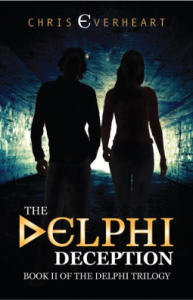 In Book 2 of the trilogy – we are back with Zach and Ashley after they had broken in to the library. They were set to run away, but it didn’t work out and both are now in the hospital.  Ashley is back in the psych ward and being medicated and Zach tries to escape – with her – but it doesn’t work.  He knows he should leave town but he fears for what may happen to Ashley if he does.

Zach ends up teaming up with Katie, Ashley’s sister and they are going to try and find answers.  Except Zach isn’t sure he can trust Katie like he can trust Ashley.  The two sneak back in to the library and Zach is caught.  Do they know who he really is? What will happen?  Katie gets the information she needs and leaves – and seemingly gives up Zach’s whereabouts at the same time.

The head of the committee tries to get Zach to talk but he refuses.  They threaten him with an injection that could lead to death but he’d rather that than tell them what he knows.

I have to say that I liked this book a bit less than the first, but it certainly was interesting and had a lot of twists that I was not expecting.  We are now left not knowing what is going to happen, I guess I will have to wait and see what book 3 has in store?

A desperate teen, a dangerous alliance, an ancient foe. The gripping Delphi Trilogy continues with Book II, THE DELPHI DECEPTION, plunging you deeper into a world of conspiracy and danger.

After ten years in hiding 17-year-old Zach made the mistake of returning to his wealthy hometown. He slammed head-on into the conspiracy that killed his parents, drove a childhood friend to suicide, and exploits other teens to fulfill an ancient agenda of greed. Zach should have run. But he stayed, and now the consequences are burying him.

His blind pursuit of the town’s deepest secrets has left him injured and terrified. The answers he’s gotten about his true identity are more disturbing than he could have imagined. And his first love, Ashley, is in more danger than ever.

Desperate to save Ashley, Zach is deterred by the mysterious man he thought was his ally. Forced to team with Ashley’s ambitious sister who’s willing to help—for a price—he enters an alliance fraught with deception and betrayal.

As the League of Delphi’s vicious new security chief closes in on him, Zach is propelled back into the jaws of danger by a cryptic command from beyond this world. Will his misguided mission save Ashley? Or will it get them both killed?