Another One Bites the Dust

November 6, 2013 by ConcertKatie No Comments 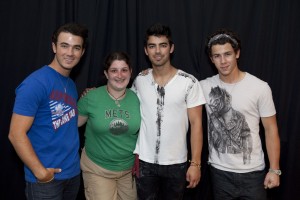 The Jonas Brothers have FINALLY broken their silence on the rumors swirling since they canceled their tour.  And I can’t be more offended with how they handled the whole situation.  Here’s a time line of what happened for those not in the “know”:

October 9 – Fans find out that the tour has been canceled due to a “deep rift” within the band
October 11 – The fall tour was supposed to kick off
There are all sorts of rumors going on about why the tour was canceled but no official statement from Jonas, it’s radio silence until
October 22 – Joe and Nick tweet “please hold while we get our shit together” and “bear with us” which seems like information will be coming
October 29 – People has an exclusive statement from the band – “It’s over for now”

But wait – if you want to read more – buy People Magazine!  And then they all went on GMA too to discuss it.

The fact that they kept fans in the dark for weeks and then in order for them to find out details of the breakup they need to buy a magazine?  At least pretend you cared and weren’t just after the fans money, boys.  Post something on your website, don’t sell it to a magazine.  It’s just so frustrating the way they handled this whole thing – and this coming from the girl who nearly 2 days before the announcement was about to tweet that she was over the Jonas brothers.  Apparently they were just as over me.

I can’t help but compare and contrast this to Honor Society’s break up. (Since that is still so fresh in my mind)  At least we got a heads up and some farewell shows, even if I wasn’t able to make it to any of them.

And then the boys FINALLY posted something on their official website on October 31 – 3 WEEKS after the first information was coming out about things going on.

“It is with heavy hearts that we confirm that our time as the Jonas Brothers is over. This decision has not come lightly, and we know that many of you will be disappointed. The time has come for us to move forward on individual career paths. We have been a band of brothers for 10 years and are now choosing simply to be brothers. Going forward, you can expect exciting things from each of us, and we will of course continue to support each other in all things.

We would like to say THANK YOU to everyone who has supported and inspired us through the years, and stood by us in this difficult decision. We feel and appreciate your love. Because you waited so long for new music, we want to honor our Team Jonas fan club members by giving you our final album. This digital-only album contains four new studio recordings that would have appeared on our V album (which will now go unreleased). In addition, we’re including 10 live tracks that we feel capture the energy and excitement of this past summer’s tour. Details regarding delivery of this digital album to Team Jonas members will be issued shortly. We hope you enjoy this album as much as we’ve enjoyed performing for you over the last 10 years. It has been an amazing experience.

You will always be the best fans in the world.

I can’t say for sure that I will *never* support them again in their solo ventures, but right now I kind of feel that way.  Maybe in time I will get over it and maybe in time I’ll get excited about potential “reunion” tours but as of right now the way they handled the whole thing leaves a bad taste in my mouth.