October 8, 2013 by ConcertKatie No Comments 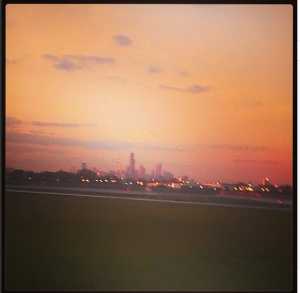 On flight 1 I learned just because you are dressed like a sharp business man, it doesn’t mean you have any common sense. Flight 2 also showed this to be true. The flight attendant said if the front bathroom was in use, there would be a red X.  Multiple people walked up to the occupied bathroom to say “I don’t see a red X”, but I guess they didn’t look because it was almost always occupied.

The pilot teased me on this flight as I got on the plane and ‘called me out’ because my bag matched my shirt.  Still keeping that note to self in my brain from the last post! I got situated and a husband and wife were next to me. I ended up dropping my pen (I brought a notebook to ‘old school’ blog throughout the trip because I didn’t bring my laptop) and it took me a good 5 minutes to pick the damn thing back up. Then I dropped it again! I can’t win.

The ride was much longer than I had anticipated but I tracked the flight on my Nook (that was free, WiFi was $8, no thanks!) Played a few games, read a book or two and tried to write a few blog posts (like this one).  We had a jet stream that meant we’d be getting in late (and I was still starving) and I wanted to nap but didn’t want to miss snack time! 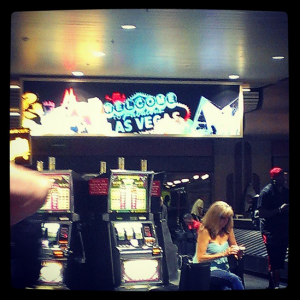 After snacks I was able to nap and woke up to see the Stratosphere outside the plane window. We had arrived!  As we were departing a woman spilled her diet coke all over my pants – the only long pants I had brought for the trip.

I made my way to baggage claim and waited for Kim to meet me from her flight.  We got our shuttle tickets and 3 hours after landing made it to the hotel.  Midnight Vegas time, 3am my time… It was time to sleep!

« Previous post
Book Review: How Not to Be a Dick
Next post »
Product Review: WEXY Snack Bags