October 27, 2013 by ConcertKatie No Comments 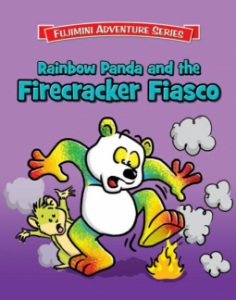 Rainbow Panda really, really wants to light firecrackers for the Chinese New Year, even though everyone is telling him that it is a bad idea.  He tries to enlist the help of some hamsters, after Black Panda tells him that he shouldn’t play with matches or light the fire crackers.  The hamsters tell him the same thing, but he knows if he throws the firecrackers at the dragon, the dragon will bring everyone good luck for the year.  Except even the Dragon tells him not to do it, because his mom might get mad.

Rainbow Panda thinks that he is an expert and tries to light the matches anyway.  He isn’t very good at it but finally gets one to light.  They are having fun with the firecracker until smoke starts to rise. The other animals come to try and help to put the fire out.  Rainbow Panda realizes that he shouldn’t have tried to be a hero and apologizes.  Black Panda is happy that no one was hurt, but reminds Rainbow Panda of the danger he put himself in.

Rainbow Panda and friends make food for everyone for the New Year and to apologize.

This is a cute book about not playing with fire. It teaches a great lesson.

Today most of the pandas are preparing for the New Year’s celebration. They are sweeping and cleaning, planting flowers and writing wishes on ribbons. But Rainbow Panda really wants to be a hero and has an explosive plan. Can Rainbow Panda convince others to join him? Will he become a hero or just get everyone in a lot of trouble? Rainbow Panda and the Firecracker Fiasco is the 6th book in the award-winning cross-cultural series Fujimini Adventure Series that invite readers to explore Fujimini Island with a cast of memorable characters who embark on unexpected and hilarious adventures.