October 21, 2013 by ConcertKatie No Comments 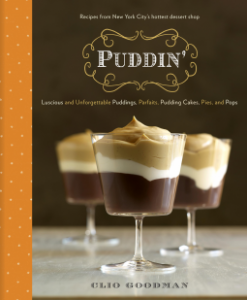 Puddin’ is a book all about… you guessed it… pudding.  It contains recipes from one of New York City’s hottest dessert shops so you know it’s going to be G-O-O-D.  The book is broken down into 6 chapters – The Classics, New Favorites, Toppings, Pudding Parfaits, Pudding Cakes and Pies and last but certainly not least – Pudding Pops!  Each chapter has at least 6 recipes and some chapters have sub sections as well.

I started reading this on an empty stomach which was probably a bad idea.  We’re going out to dinner soon and now all I want is some pudding…

The concept of making pudding is really quite simple, maybe I can master something in the kitchen after all!  (And yes there is some Vegan options in the book if that is what you are looking for!)

Rather than have me gush about every. single. item. in this book, I’ll make a list of some of my favorites as I go along. (Which will also sort of act as my e-bookmark so I can come back and decide to make some of these later!)

The classic American treat finally gets its due: foolproof pudding recipes, from irresistible standards to inventive modern twists, by the chef and owner of New York City’s popular pudding destination.

Puddin’ shares Clio Goodman’s secrets for re-creating—and improving on—your sweetest childhood memories. From grown-up renditions of snack-time favorites like Butterscotch Pudding (spiked with whiskey) to party-ready showstoppers like Banana Upside-Down Cake with Malted Pudding and summertime crowd-pleasers like Peanut Butter Fudge Pops and Peach Melba Parfaits, Puddin’ serves up luscious and decadent recipes for your every dessert whim. Along the way, Clio offers suggestions for adapting her pudding recipes—all of which are naturally gluten-free—for vegan and low-fat variations. And because creamy pudding just begs for a companion, Puddin’ also includes recipes for homemade toppings, such as Salted Caramel Sauce, Marshmallow Crème, and Brownie Crumbs, that can be mixed and matched with the puddings of your choice or incorporated into one of Clio’s signature parfaits.

These surprisingly easy-to-execute pudding creations are destined to become staples of your dessert repertoire. Puddin’ is a celebration of an American classic.