October 18, 2013 by ConcertKatie No Comments 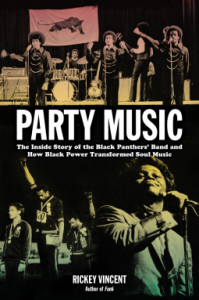 Party Music is all about the Black Power Era of the late 60s and early 70s and chronicles the time through the music of the era.  Artists like James Brown and Marvin Gaye are featured, as well as many, many others.  A mix of music and history, an interesting book though a bit long.

Examining the culture and politics of the Black Power era of the late 1960s, this book explores the relationship of soul music to the Black Power movement from the vantage point of the musicians and black revolutionaries themselves. The 1960s were a turbulent time for race relations in the United States, but no other area in the country epitomized the radical social change that was taking place more than the San Francisco Bay Area—the epicenter of the Black Panthers movement. This social history introduces fans of soul music and 20th-century U.S. history enthusiasts to the Black Panthers’ own band, the Lumpen, a group comprised of rank-and-file members of the Oakland, California–based Party. During their year-long tenure, the Lumpen produced hard-driving rhythm-and-blues that asserted the revolutionary ideology of the Black Panthers. Through his rediscovery of the Lumpen, and based on new interviews with Party and band members, author Rickey Vincent provides an insider’s account of Black Power politics and soul music aesthetics in an original narrative that reveals more detail about the Black Revolution than ever before.