October 13, 2013 by ConcertKatie No Comments 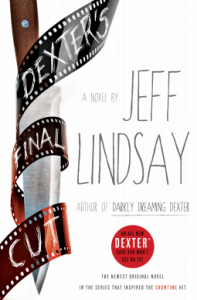 Dexter’s Final Cut is the latest book in the Dexter series of books of which the TV show was based on.  While I had always intended to read the books before, I never did get around to it so I was hoping that reading the last one first and only having watched a few seasons of Dexter, that I’d not be too confused with the book. And I really wasn’t. Except in the books there is no Harrison – Dexter has daughter named Lilly Anne.  Once I got over that initial shock, everything was pretty much fine!

In this book, Dexter is going to be shadowed by a popular actor who will be playing a character similar to him on a hot new TV show that is going to be filmed in Miami.  Dexter’s sister, Deborah, is being shadowed by his costar.  They have to bring the actors along on their crime scenes to help them see what really happens so that they can use this to learn and base their characters on.  While they are out on a case, they put the pieces together and realize that the serial killer has been attacking women in different locations – but the locations and times all seem to match up to where Jackie Forrest, the actress shadowing Debs, has been working.  They find some letters from a supposed stalker and figure out that he must be their man, and his Facebook profile shows that he is currently in Miami.

Dexter is hired to be a bodyguard for Jackie, who doesn’t want to let anyone know what is going on because she doesn’t want to lose her part on this TV show fearing it’ll be easier to replace her before filming starts than to protect her.  Dexter of course tracks down the killer and does what he does best… but then there is another murder – Jackie’s assistant!  Is this a copy cat or did Dexter get the wrong guy?

I had figured out what was going on early on – it’s just too bad that Dexter didn’t too.  Lots of action, drama and romance are going on in this book – I’m going to have to go back and read the others at some point too.  (I’ll need something to keep me occupied now that the show is over!) If you love the show I think you’ll love the book – afterall the show is based off of them.

With 1.7 million copies of the Dexter novels sold, and ever-increasing critical acclaim, Jeff Lindsay returns to his groundbreaking and beloved character with his most entertaining book yet. Get ready for a grisly send-up of Hollywood, and a full dose of dark Dexter wit.

Lights. Camera. Mayhem. You won’t find this story on television.

Hollywood gets more than it bargained for when television’s hottest star arrives at the Miami Police Department and develops an intense, professional interest in a camera-shy blood spatter analyst named Dexter Morgan.

Mega-star Robert Chase is famous for losing himself in his characters. When he and a group of actors descend on the Miami Police Department for “research,” Chase becomes fixated on Dexter Morgan, the blood spatter analyst with a sweet tooth for doughnuts and a seemingly average life. To perfect his role, Chase is obsessed with shadowing Dexter’s every move and learning what really makes him tick. There is just one tiny problem . . . Dexter’s favorite hobby involves hunting down the worst killers to escape legal justice, and introducing them to his special brand of playtime. It’s a secret best kept out of the spotlight and away from the prying eyes of bloated Hollywood egos if Dexter wants to stay out of the electric chair. The last thing he needs is bright lights and the paparazzi. . . but even Dexter isn’t immune to the call of fame.

Jeff Lindsay’s razor sharp, devilish wit, and immaculate pacing prove that he is in a class of his own, and this new novel is his most masterful creation yet.