September 22, 2013 by ConcertKatie No Comments 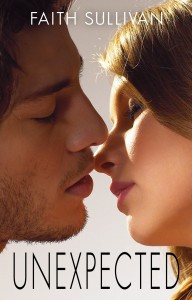 Unexpected is another book by Faith Sullivan.  I was a bit hesitant to agree to read this one at first because her other series made me so nuts… but I do love her writing style so I figured I would give it a go. I am happy to report that there was no urge to snap my Nook in half after reading this one 😉

Unexpected is about a girl named Michelle who is from PA and is currently living in NYC starting her first semester at NYU.  The book takes place in 2001, so you know what the day that forever changes her destiny is – September 11th.  Michelle is in her apartment for 3 days following the attack with no contact with anyone else as she doesn’t yet know anyone else in the city.  She tries to stick it out at NYU but ultimately ends up dropping out and moving back home to PA.

On New Years Eve she meets Connor, a native New Yorker who invites her to be a waitress at his bar and lets her live in the apartment upstairs.  They both seem to be in to each other but then there is also the fact that Connor is her boss.  Michelle sees him leaving with girls all the time so she thinks that he is a bit of a player and tries to keep their relationship professional but at the same time she wants to know more about him.  As she finds out more about Connor’s pass she wants to help him, but does he want the help?

Frustrated, Michelle ends up running off and leaving seemingly without a trace. (At least as far as Connor knows)  Will he go after her? Is she better off without him?

With Michelle gone – Connor realizes it is her that he really wants.

But what happens next? It’s quite unexpected.

I really enjoyed this book. It was a rather quick read and I became really invested in the two main characters very quickly.  There was a lot of tension between them and I couldn’t help but hope that they would end up together – somehow.  Although I wasn’t sure if that would end up happening or not because both of them are a bit stubborn!  I don’t want to give away too much of what ends up happening – you’ll have to see for yourself!

One day forever changes the destiny of college overachiever, Michelle Rhodes.
Shattered, confused and alone, no one understands the trauma consuming her until she meets Connor Donnelly.
A native New Yorker, he believes he can aid in getting her life back on track. But what if he’s even more broken inside?
Offering her a chance at a fresh start, Connor convinces Michelle to move in with him. Hiring her to waitress at his bar, their mutual attraction only complicates matters.
As more details surrounding Connor’s past emerge, Michelle uncovers the full magnitude of the loss he’s trying to hide. Refusing to let her feelings for him hinder his recovery, she makes a decision that winds up hurting them both.
By sacrificing her heart, Michelle thinks she is helping Connor come to terms with his grief. Little does she know, Connor is gambling everything for the sake of having a future with her.
What happens is truly unexpected.