August 2, 2013 by ConcertKatie No Comments 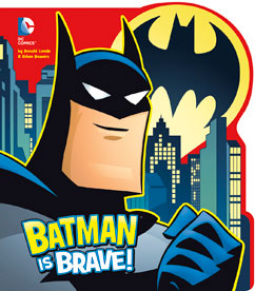 This is a cute book about Batman and how he is brave.  It is only 18 pages with some great illustrations and is a great book for your child who may be just beginning to read.

Follow BATMAN on this colorful, action-packed adventure about being brave! Illustrated by award-winning artist Ethan Beavers in the popular DC Animated Style, BATMAN IS BRAVE! introduces young children to the character education concept of courage, while appealing to comic book fans of all ages.

Board Book for ages 1-3. From the DC BOARD BOOKS series, featuring DC Comics’ Greatest Super Heroes, BATMAN and SUPERMAN!

*Wide appeal – SUPERMAN and BATMAN are the most popular super hero characters in the world!
*Proven track record – Capstone has sold over 600,000 copies in the DC SUPER HEROES chapter book series
*Safe and educational – each book focuses on a character education topic (courage, respect, honesty, responsibility) in a safe and gentle way

About the Author:
Donald Lemke works as a children’s book editor. He has written dozens of comic books, including the Zinc Alloy series and the adventures of Bike Rider, and many chapter books for DC Comics. Donald lives in Minnesota with his beautiful wife, Amy, and their not-so-golden retriever, Paulie.