June 1, 2013 by ConcertKatie No Comments

Last night was my last show of The Package Tour. (I think. I can probably be convinced to go to more lol)  This show I had VIP for 98 Degrees.  I was supposed to be at the casino at 5 but was stuck in traffic and FREAKING OUT.  Who does construction work on a Friday night!? Oh, Connecticut does.  I ended up getting there about 5:45 (I was told they’d bring everyone back at 5:30) and had to “run” to where they were holding it.  Fortunately I got there in time and was last in the auto signing line.  Which meant I got even more time with them (says Drew “everything happens for a reason”) and then it was time for the Q&A which was relatively short – they talked a bit about why Jeff was facing sideways on the cover of the album  “that’s my side!” and that it was actually 4 separate photos put together.  They talked about how they formed as a band and how when they got back together they couldn’t really remember the lyrics “Nick can’t even remember lyrics to songs HE WROTE” and that the harmonies were there but they did have to re-learn the older songs.  And then someone asked them what the underlying meaning of Microphone was and Nick said there wasn’t one and that there was a technique to using it – if you don’t hold it close enough to your mouth, no one can hear you.  Then it was time for the picture and Jeff was very happy I made it back to them after missing the signing – so much so he kept repeating it to me when I was talking to Nick. haha

For the show I had the farthest back seats of the whole run – which stunk. I kind of wished I had these seats first (and technically this was the first announced show then they added more BEFORE!) because now I was spoiled.  The section also was ROCKING during Motownphilly so I was a little bit concerned about standing for the New Kids set if it was shaking around that much for Boyz II Men.  Boyz II Men and 98 Degrees set was basically the same – though I do think 98 Degrees may have had new outfits again. And they did switch up who had ties and who had bowties.

New Kids changed up their set a bit again – and they just look like they are having SO MUCH FUN on stage it is hard not to have the time of your life.  They didn’t do Crash in the encore.  Their Boston jerseys were now Red Sox (the Bruins ones they gave away at the Boston Strong concert the night before) and after Cover Girl and a couple other songs when Donnie had his shirt off – when he went to put his jacket on everyone BOO’ed! So he threw the jacket down and everyone cheered and continued without his shirt on – but then went over to Danny and tore HIS shirt off too!

After the show I went to the After Party – hosted by Donnie with special guests Danny and Boyz II Men.  When I got in, Jeff and Justin from 98 Degrees were there dancing around.  It was really NUTS – probably too many people and pure chaos when Donnie showed up (but he walked right by me!) and he said he was going to go in the crowd but that everyone had to be cool and not grab at him and stuff – of course that didn’t work at ALL.  Why these women can not act like the adults that they are, is beyond me.  If everyone just kind of hung out where they were it would have been a lot easier for him to mingle with everyone.  He came by to get back to the stage and then a parade of people were just following him.  Get your pic, say hi, get a hug, whatever, and then move on.  I didn’t try for a pic with him because it was too nutty.  But I did get a pic with Wanya from Boyz II Men and Danny’s dad!

I got home at 3am which is why this post is so late.  Pictures coming… maybe someday lol I’m beat 🙂 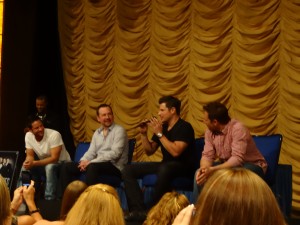 I will give you this photo of 98 Degrees Q&A.