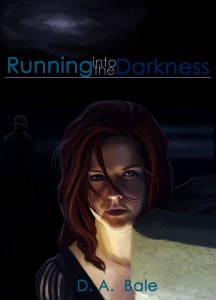 Running into Darkness is the story of Samantha Bartlett.  She is living in NYC doing a medical residency.  After a rough day at work she goes home only to find out that her Gramm has died.  She goes back home to Kansas on a plane – something she vowed she’d never do (fly in a plane) after her parents death.  She finds out that her Gramm’s death was most likely a hit and run and is under investigation by her childhood friend who is now a cop.

Samantha starts piecing things together as she goes through her grandmother’s belongings and realizes that she probably isn’t safe.  She heads for cover in the house’s “‘fraidy hole” as her grandmother’s house goes up in flames.  But she is rescued and then realizes that her life is no longer her own.  She has been taken by the Elite and is transformed into a femme fatale with one mission – to kill the President by seducing him.  But there’s only one problem – she has recently found out that the President… is her biological father!

This book is crazy – in the best way possible – completely full of action and high tech gadgets and anything else you might want in a novel of  this type.  Will Samantha be able to go through with her mission given to her by the Elite?

I don’t know… because the book is the first in a series.  (ok, I do know. But boy oh boy is there a cliffhanger and now I am anxiously awaiting book #2!)

Running into the Darkness Book Summary:

Death follows Dr. Samantha Bartlett throughout her life until it claims everyone close to her. There’s one powerful man responsible on whom Samantha sets her sights for revenge. The price is her soul. For centuries, sex has been the weapon of men…now it’s her turn.“I never intended to kill the President. As a doctor, I swore an oath to protect life – not take it. But that was before…”

Second year resident, Dr. Samantha Bartlett, is swept from the frigid New York winter to once again confront the sting of death back home – and face those she left behind. But she’s not alone. A strange man she dubs Shades haunts her every step as she seeks answers to the inferno which claimed her grandmother, an eerie reminder of her parents’ deaths. The secrets Samantha uncovers forever changes her image of those she only thought she knew.

Confronted by Shades, Samantha joins a secret underworld known only as the Elite, where a web of power and control is woven deep within governments worldwide. Their sights are set on the power structure of the United States, and Samantha becomes the unlikely key to infiltrating the White House at its most intimate levels.

The quest for blood threatens to destroy Samantha. From the darkness there is no escape.

Sometimes life emulates fiction.Life is filled with tragedy and Ms. Bale’s writing reflects this reality. However, there is always a silver lining…even if one must spend their entire life searching for it.

In her previous career, Ms. Bale traveled the United States as a Government Relations Liaison, working closely with Congressional offices and various government agencies. This experience afforded her a glimpse into the sometimes “not so pretty” reality of the political sphere. Much of this reality and various locations throughout her travels make it into her writing.

She dreams of the day she can return to visit Alaska.