Book Review: How I Got Him To Marry Me: 50 True Stories 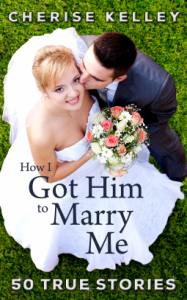 How I Got Him To Marry me is 50 true (or so we think) stories about how women got their men to marry them.  All of them were married after 1990, when it was more common to just move in with your boyfriend and start having kids than it was to be married.  The author has talked to many women and compiled 50 stories about what they did to try and get their boyfriend to propose.  Some offered an ultimatum, others realized after a near death situation that they couldn’t be without them, and some used what I would consider to potentially be trickery.  All very interesting stories!

I love reading true story books like this, they are always interesting.  And I don’t think the stories were that out there that people would have made them up (the author asked for them all on the internet and they had certain things they needed to answer in their stories so that they would fit in the book.)  A lot seemed to have guys who were previously married that were then scared to make the commitment again.  Definitely interesting!

Boyfriends make excuses like “Marriage is just a piece of paper,” and “Living together is just as good as being married.” Many women who value the commitment of marriage and/or the stability it affords for raising children have a hard time getting him to marry us in this environment. This book is written for the woman in this predicament. Her boyfriend has proposed not marriage, but living together.

You don’t have to interview 50 married women to find out how they managed to get that ring on their finger. The author has done that for you. All 50 were married after 1990, so this is modern information for our changing times. Read and find out how you can get him to marry you and not just live together!

Sandy’s boyfriend Jack wouldn’t even bring up the ‘m’ word. She started leaving her things in his apartment, including some tampons in his bathroom. It worked! Too off guard to make excuses like “Living together is just as good as being married,” Jack said, “People will start to think you’re my wife!” “Well, how about it?” Sandy asked Jack.

Crystal got Paul to skip just living together by refusing to move across the country until she had a marriage license, signed and dated.

Read these full stories plus 48 more, ranging from the heartwarming to the hilarious!