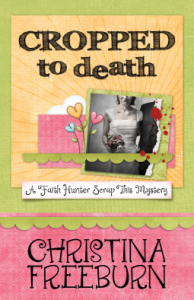 Faith returns home to work at her grandmothers scrapbook store and while at an event, one of the worker’s husbands is murdered.  Of course, everyone believes that Marilyn, his soon to be ex wife is the one who did it.  Except Faith.  Marilyn tells Faith to find out who really did this so that she can be set free and Faith jumps in head first into the world of private investigating, something that we find out that she is not that great at.  She drives the detective on the case crazy as well as everyone around her with her theories of who did it.  She goes through several suspects before finally everything becomes pieced together and they figure out who really did it, and why.  (Maybe thanks to Faith’s meddling in the investigation. I won’t tell you for sure)

Faith had me convinced that some of her suspects had done it – I was running all sorts of scenarios in my head and some of them were absolutely crazy (and no, they didn’t cross anyone’s mind in the book, just my own.)

Former US Army JAG specialist, Faith Hunter, returns to her West Virginia home to work in her grandmothers’ scrapbooking store determined to lead an unassuming life after her adventure abroad turned disaster. But her quiet life unravels when her friend is charged with murder, and Faith inadvertently supplied the evidence. So Faith decides to cut through the scrap and piece together what really happened. With a sexy prosecutor, a determined homicide detective, a handful of sticky suspects and a crop contest gone bad, Faith quickly realizes if she’s not careful, she’ll be the next one cropped.

Christina Freeburn wrote her first book in the ninth grade, mostly during algebra class (which she doesn’t recommend). She served in the JAG Corps of the US Army and also worked as a paralegal, librarian, and secretary. She lives in West Virginia with her husband, children, a dog, and a rarely seen cat except by those who are afraid or allergic to felines. When not writing or reading, she can be found in her scrapbook area among layouts, paper, bling and stuffed Disney characters. Her novel, Cropped to Death, brings together her love of mysteries, scrapbooking, and West Virginia.