March 1, 2013 by ConcertKatie No Comments 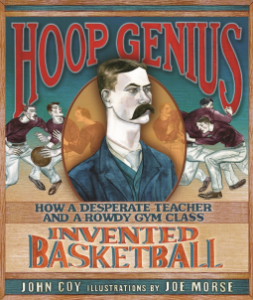 Hoop Genius by John Coy tells the story of how a desperate teacher and a rowdy gym class invented basketball.

This book is geared at young adults, so it is rather short and each page has illustrations by Joe Morse.  Since I often have trouble keeping attention for books that are too long, I like to take a break here and there and read one of these young adult / children’s books just to make myself feel better. haha.

Anyway… James Naismith was forced to take over a gym class that was so bad that it had previously made TWO teachers quit.

It shows how he tried various sports in doors and the funny thing is as the book progresses, the bandages on the characters in the gym class increase.  I guess they were a bit rough on each other in class.

He came up with the new game that wouldn’t allow running with the ball and that would have a goal that was off the ground.  He used a soccer ball and basket for the goal.

The first game, he had to call a lot of fouls because the boys weren’t used to the rules yet.  After 2 fouls they had to sit on the bench until a goal was scored.

Only 1 goal was scored the whole game!

Basketball ended up catching on – and even helped James find a wife!

Overall this was a cute and informative book about how basketball was created.  I have visited the basketball hall of fame (in Mass and named after James Naismith) a few times, so I have seen some of the set ups of their original games.  Amazing how far it has come.

I received an e-copy of this book from the publisher through NetGalley in order to write this review. I was not otherwise compensated.

Taking over a rowdy gym class right before winter vacation is not something James Naismith wants to do at all. The last two teachers of this class quit in frustration. The students—a bunch of energetic young men—are bored with all the regular games and activities. Naismith needs something new, exciting, and fast to keep the class happy—or someone’s going to get hurt. Saving this class is going to take a genius. Discover the true story of how Naismith invented basketball in 1891 at a school in Springfield, Massachusetts.