Book Review: Not Planning On You

December 19, 2012 by ConcertKatie No Comments 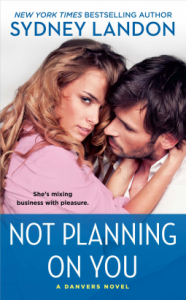 Not Planning On You is the followup book to Weekends Required, although the character set is different so you can probably read them out of order if you had to.

Not Planning On You follows Suzy Denton (Claire’s coworker and BFF) and her budding relationship with Grayson, who’s company Memicon has just done a merger with Claire’s now husband Jason’s Danvers company.

Gray had been into Suzy since they met in the first book when Jason and Gray were out to dinner and bumped into Suzy and Claire at the restaurant.

Suzy had just been going through a bad breakup where she found out that her fiance that she had been dating since college was cheating on her.  She didn’t really have much faith in men at that point and really didn’t want to get involved with someone like Gray.

Suzy ends up getting in an accident and Gray refuses to let her recover anywhere other than his house. (The broken ankle she suffers would be hard to deal with at her condo, which has stairs.)  Over the time Suzy is recovering, she slowly begins to let down her guard and begins to fall in love with Gray.

Then one day his phone is buzzing out of control – messages are from someone else calling him lover!  Is this relationship going to be like her previous where she found out about the cheating via texts?

Gray tries to convince her that it is nothing, just a crazy stalker ex.  But is it more than that?  Can their newly blossoming relationship handle this stress?

I think I liked this book a bit more than Weekends, mainly because it had less Fifty Shades similarities (boss/assistant) even though the main character WAS named Gray…  These are fun easy to read stories with likable characters.  (I have to wonder if the next book will be about Gray’s brother hooking up with Suzy’s sister – I think something is going on there!)

I received a free e-copy of this book from the publisher via NetGalley. I was not otherwise compensated and all opinions are my own.

From the New York Times bestselling author of Weekends Required

Suzy Denton thought she had it all: a great job as an event planner for Danvers International and a committed relationship to her high school sweetheart…

But now her life has gone to hell in a hand-basket. Not only did she discover her fiancé cheating, but a recent corporate merger is making her job very difficult—mostly due to Grayson Merimon, wealthy CEO. Gray is a man who goes after what he wants. And, after their first meeting, he wants Suzy.

Even though he looks like every fantasy she’s ever had, Suzy is wary of the powerful businessman. She likes her newfound independence, even if her best friend thinks it’s an excuse not to risk her heart again. Besides, she doesn’t think Gray could ever be interested in a relationship with someone like her. When he calls her bluff, Suzy agrees to one night together.

But when circumstances continue to throw them together—and with Gray determined to show her that two opposites can be a perfect fit—Suzy realizes that she might just have found the one man who can give her what she always needed….