Book Review: Nobody Has To Know

December 20, 2012 by ConcertKatie No Comments 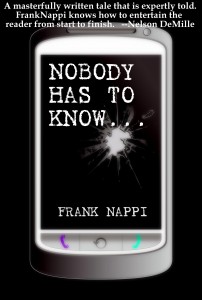 Being on a Thriller book kick lately, I knew that I had to check out Nobody Has To Know by Frank Nappi as soon as I read it was a thriller.  The fact that it shares its name with one of my favorite Honor Society songs didn’t hurt either.

The book is about Cameron (Cam), who is a high school teacher. He is one of those popular “cool” teachers that all the students love (you know the ones I mean – the one that the girls all have secret crushes on!) He has a wonderful girlfriend, Hayley but it seems like their relationship is not going as well as they would have liked anymore.

Cam ends up meeting up with one of his high school students several times which leads his life in a direction that he probably was not wanting to go in.

Cam ends up being blackmailed – someone knows his secret and if he doesn’t meet the persons demands – they will tell! Cam ends up getting wrapped up in a bunch of lies and tricks by the blackmailer and then finds out that his soon to be wife is now wrapped up in all this as well!

Of course, it is a thriller and things are not always what they seem…  I won’t tell you much more than that though because I don’t want to give anything away and I think that you should check this book out for yourself! (I also liked the mention of Cam telling one of his students to read The Legend of Mickey Tussler – this book is written by the same author and I will be reviewing it in January – so stay tuned for that!)

I ended up reading this book while stuck in the dark during Hurricane Sandy just before Halloween.  While you can read it any time, it was probably the perfect choice for me to be reading in a pitch black room with only the glow of the Nook!

I received a free e-copy of this book in order to write this review. I was not otherwise compensated and all opinions are my own.

Nobody Has To Know, Frank Nappi’s dark and daring new thriller, tells the story of Cameron Baldridge, a popular high school teacher whose relationship with one of his students leads him down an unfortunate and self-destructive path. Stalked through text-messages, Baldridge fights for his life against a terrifying extortion plot and the forces that threaten to expose him.

Nobody Has To Know is a sobering look into a world of secrets, lies, and shocking revelations, and will leave the reader wondering many things, including whether or not you can ever really know the person you love.

Frank Nappi has taught high school English and Creative Writing for over twenty years. His debut novel, Echoes From The Infantry, received national attention, including MWSA’s silver medal for outstanding fiction. His follow-up novel, The Legend of Mickey Tussler, garnered rave reviews as well, including a movie adaptation of the touching story “A Mile in His Shoes” starring Dean Cain and Luke Schroder. Frank continues to produce quality work, includingSophomore Campaign, the intriguing sequel to the much heralded original story, and is presently at work on a third installment of the unique series. Frank lives on Long Island with his wife Julia and their two sons, Nicholas and Anthony.

Nobody Has to Know blog tour site:
http://nobodyhastoknowblogtour.blogspot.com/