December 15, 2012 by ConcertKatie No Comments 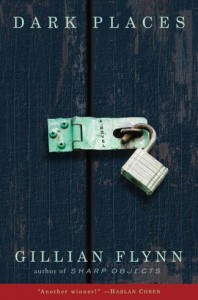 Dark Places is another book by Gillian Flynn, who has quickly become one of my favorite authors. The book centers around Libby Day.  When she was 7 her 2 sisters and mother was brutaly murdered in her home.  She ran off and was able to stay safe and testified that her older brother Ben had killed them all.  Now it is 25 years later, Libby is in her early 30s and her brother Ben has been locked away all this time and she has never visited him.

When she is approached by the “Kill Club” to come to a meeting, she decides to check it out.  She has no money and is told that the members of the club may be interested in buying mementos from her family.  The club urges her to think about her testimony and get to the bottom of who really killed her family – they don’t believe it was Ben.  The more Libby thinks about that day, the more her memory is coming back to her.

She goes to talk to Ben, she tracks down her father and slowly begins to piece together information from letters and other items she finds in boxes that she has had stored away for years.

The book alternates between Libby’s present day adventures and what happened back in 1985 as told by her mother and Ben.

I was all over the place with who I thought did it, and the answer kind of came from left field, at least I thought so.  My mother also read the book and said she had no problem with the ending and didn’t think it was as strange of an ending as I did. *shrug*

Overall, it was another great book by Gillian Flynn and I am bummed that I have now read all 3 of the books that she has had published!  I need another!

I was not asked to write this review nor was I compensated in any way.  It is an interesting book that I read for myself and decided to review on the blog.

I have a meanness inside me, real as an organ.

Libby Day was seven when her mother and two sisters were murdered in “The Satan Sacrifice of Kinnakee, Kansas.” As her family lay dying, little Libby fled their tiny farmhouse into the freezing January snow. She lost some fingers and toes, but she survived–and famously testified that her fifteen-year-old brother, Ben, was the killer. Twenty-five years later, Ben sits in prison, and troubled Libby lives off the dregs of a trust created by well-wishers who’ve long forgotten her.

The Kill Club is a macabre secret society obsessed with notorious crimes. When they locate Libby and pump her for details–proof they hope may free Ben–Libby hatches a plan to profit off her tragic history. For a fee, she’ll reconnect with the players from that night and report her findings to the club . . . and maybe she’ll admit her testimony wasn’t so solid after all.

As Libby’s search takes her from shabby Missouri strip clubs to abandoned Oklahoma tourist towns, the narrative flashes back to January 2, 1985. The events of that day are relayed through the eyes of Libby’s doomed family members–including Ben, a loner whose rage over his shiftless father and their failing farm have driven him into a disturbing friendship with the new girl in town. Piece by piece, the unimaginable truth emerges, and Libby finds herself right back where she started–on the run from a killer.