October 22, 2012 by ConcertKatie No Comments 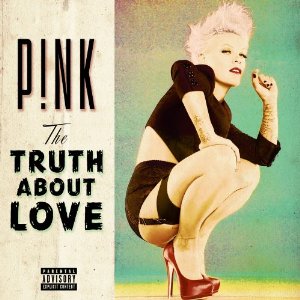 
Let’s start first with how I used to HATE P!NK.  When she first came out – with her pink hair, my hair was dyed pink too so I hated her. (Hey, in high school that is a perfectly good reason to hate someone)  Then I saw her open up for NSYNC (twice) and decided that she was a bad ass.  On her mizzundastood tour, I got 2nd row tickets in a radio presale which I believe at that time was the closest I had ever been at a show.  But cameras weren’t allowed so I had to check mine at the venue.

Anyway… now I love pink though I haven’t been keeping up with her albums too much lately- just the radio singles.  But I figured I’d get back in to it with her latest release – The Truth About Love.  (The fact that she’d finally be coming back to CT on tour may have had a bit to do with it)

Before I had the album, I had heard that it was “a lot of filler” and the first few times listening to it I had this in the back of my mind and I think it made me a bit biased because the first couple times through I was like.. you know this album isn’t all this great it is a lot of filler.

But then I got out my headphones and listened to it straight through (previously I had been listening in the car).  With headphones on I got to pay more attention to everything.  While there are a lot more slower songs than I would like, I wouldn’t really call them “filler”, they are all beautiful in their own way.

Another of the complaints that I had seen before listening to the album was that she swears for no reason.  I do have the explicit version and I do dislike when bands swear and use the F-word just to sound “cooler”, but I don’t get that vibe from her songs.  I think that the words serve their purpose in each of the songs that they appear in without it making it seem like she is trying too hard.

As far as the songs featuring other artists – I’d love Just Give Me A Reason a lot more if it didn’t have Nate from fun. on it.  But as far as Eminem’s song, I think it is perfect with his additions to it.

A lot of the songs I am hoping get added to her set list for her tour – because I can’t wait to see what she decides to do with them with a large scale stage show (have you seen her stage yet? it looks freaking AWESOME!)